Discover The Famous Volcanoes Of Iceland In This Guide! 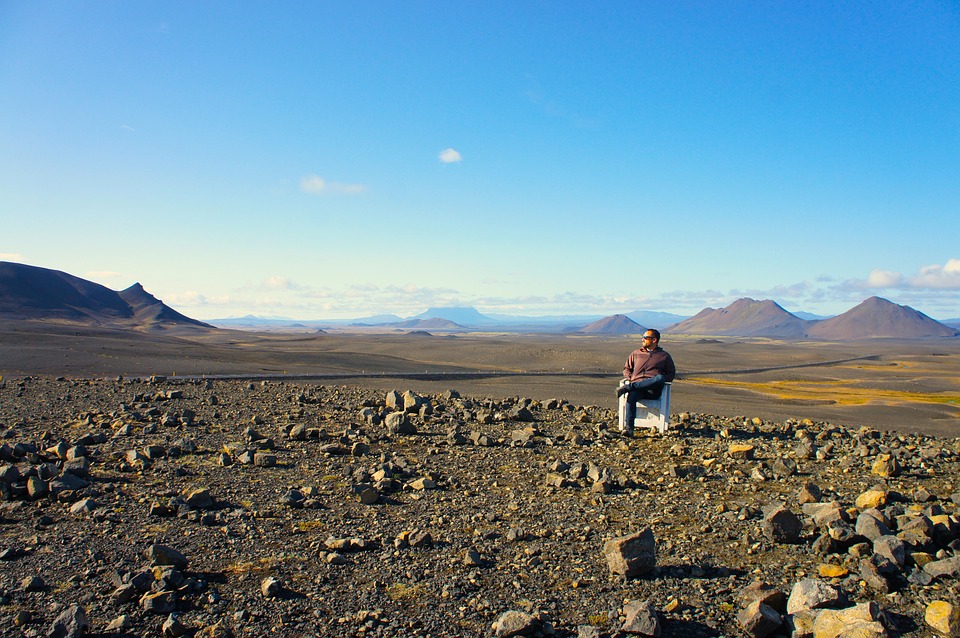 Some people see the word "volcano" and switch vacation destinations. But these enormous lava-erupting forces of nature can be beautiful when they’re not dangerous.

Luckily for you, there are plenty of safe volcanoes to check out.  That doesn’t mean there aren’t any volcanoes you should avoid, though.

After reading this article, you will know everything about volcanoes in Iceland, how do they work, where they are, people will even call you...

Should I be scared?

Maybe you’re thinking to yourself, "I’m about to visit Iceland, Should I cancel my trip?" Well, you’ve come to the right place to find out.

Iceland has a ton of volcanoes. But don't worry, volcanic activity is being closely monitored by the Icelandic Meteorological Office and by the London volcanic ash advisory. So be assured that safety measures will be taken if they go crazy!

With this article you will know where you can go and be safe during your trip in Iceland!

How many volcanoes are there in Iceland?

Iceland has 32 volcanic systems encompassing around 130 volcanoes in Iceland, active and inactive.

Some are not considered as active anymore because they have not erupted for more than 10,000 years.

In this map you can see how are spread the most important and famous volcanoes of the island.

Why are there volcanoes in Iceland?

The reason of the volcanic activity is that Iceland is located on the mid-Atlantic Ridge.

Image: The volcanic areas in Iceland

The two tectonic plates are divergent, meaning that they are moving constantly and are pulling away from each other. Because of that, magma rises to fill the space between them and therefore, create volcanoes.

To see these two tectonic plates, the best places to go are Thingvellir, Reykjanes Peninsula, and the Lake Myvatn Area. At these places, you will clearly see the walls of the two continents.

Like the weather, volcanic eruptions in Iceland are unpredictable but are quite regular.

On average, a volcanic eruption occurs every four to five years. Since 19th Century, not a decade has gone by without one going off. The most recent ones were the Holuhraun volcano, located in the Highlands (2014).

Grimsfjall volcano (2011) and the most famous one: Eyjarfjallajokull (2010) which has caused a lot of trouble. It is thanks to this volcanic eruption that tourism exploded.

This volcano is located near lake Myvatn in the North of the country, and a must see when you go there! 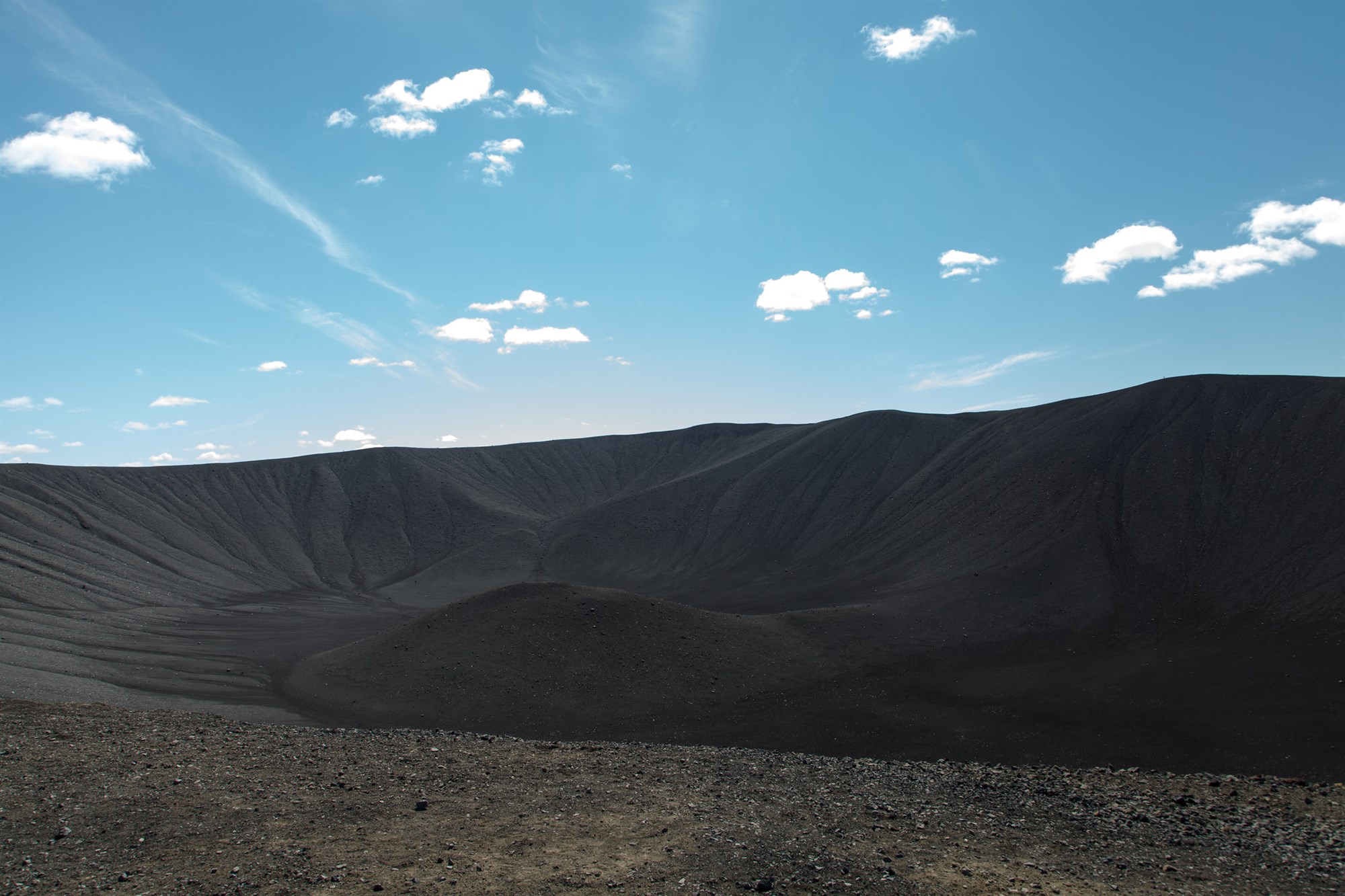 Photo: Hverfjall - Norton Ip - Flickr - No changes were made

It is between 2500 and 3000 years old and appeared from a single eruption (it never erupted again since). This volcano is located in a very beautiful area, really close Grotjaga cave and Mývatn Nature Baths.

To realise how incredible it is around, just climb up to the edges and walk around to enjoy the crater and the surrounding.

Located near to Hverfjall, near lake Myvatn, this place is place in definetely a must see! 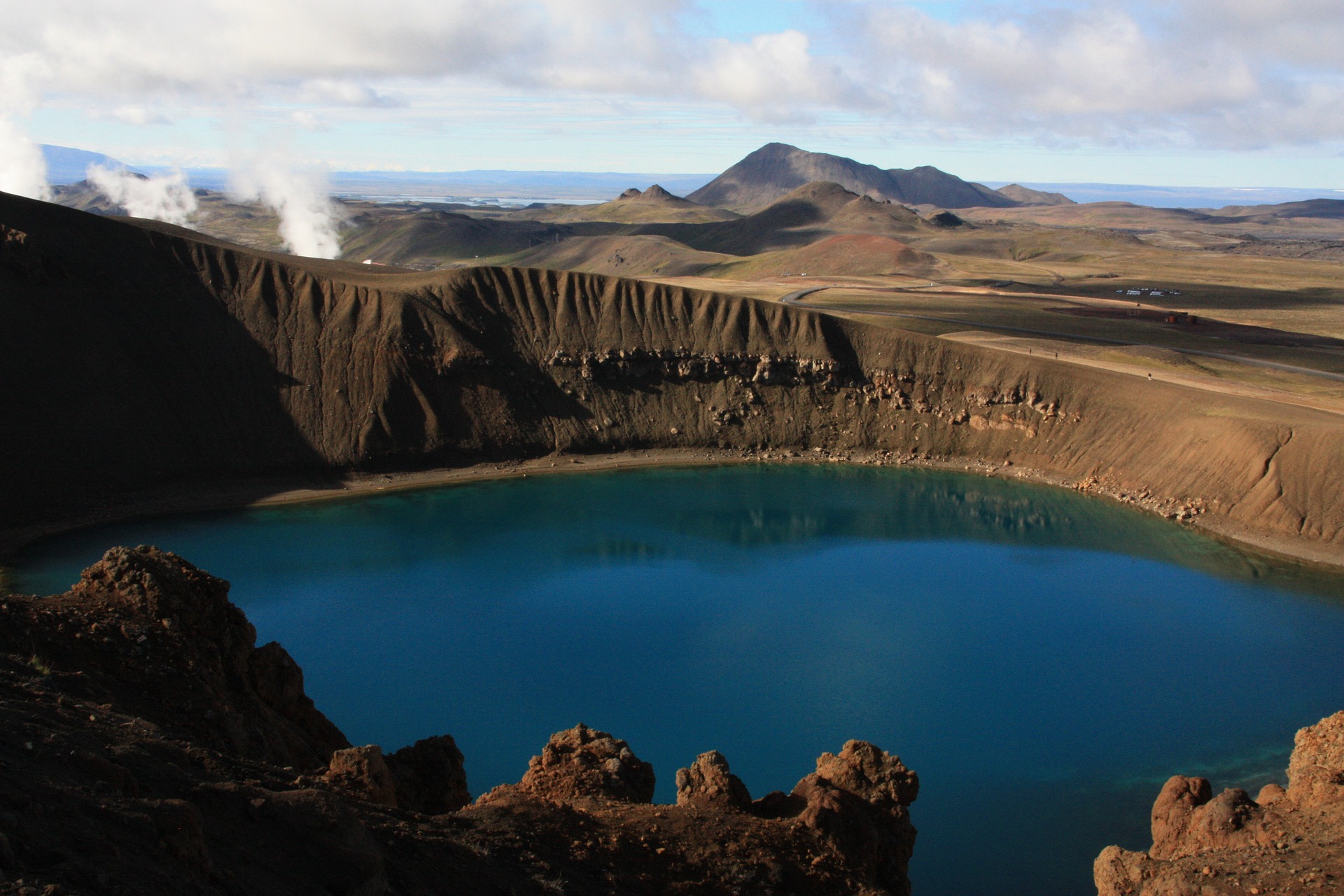 Photo: Krafla Volcano has water is its crater

This volcano last erupted in 1984 and it doesn’t seem likely to do it again (in a near future at least). This eruption changed the shape of it but has also another consequence... on Grotjaga cave!

Before the eruption, people enjoyed bathes in this cave. But now because of the eruption, the water temperature varies a lot. So unfortunately is it not allowed anymore to soeak in the water...

This volcano has a crater on it named Víti, which means ‘hell’ in Icelandic. At the very least you should explore this volcano so that you can tell your friends you went to hell.

Located in the south of the country Öræfajökull will amaze you by its size and beauty! 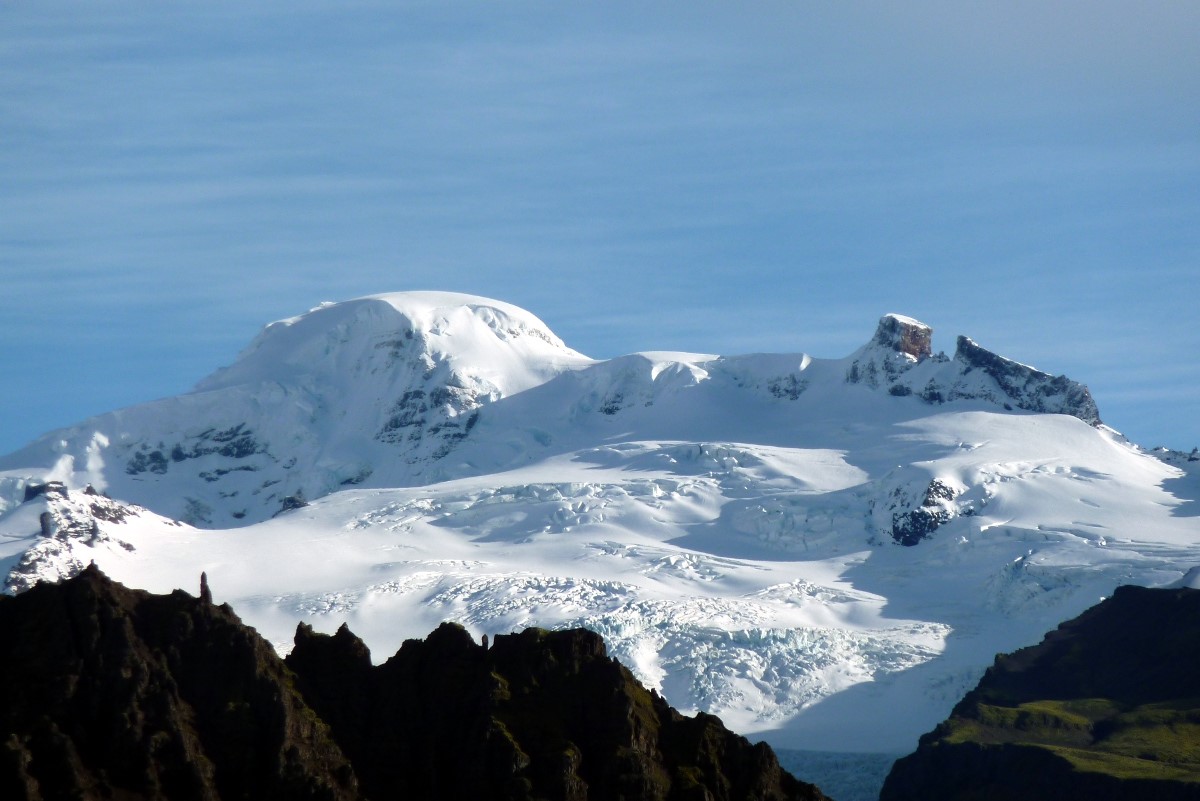 Photo: Öræfajökull, biggest of its kind in Iceland

Öræfajökull is ice covered and the largest and highest active volcano in Iceland. It erupted only twice since the settlement of Iceland.

Despite that, it is being monitored very closely because it likely to erupt in the near future.

This volcano is famous for it's beauty but also for its historic eruption is 18th century. 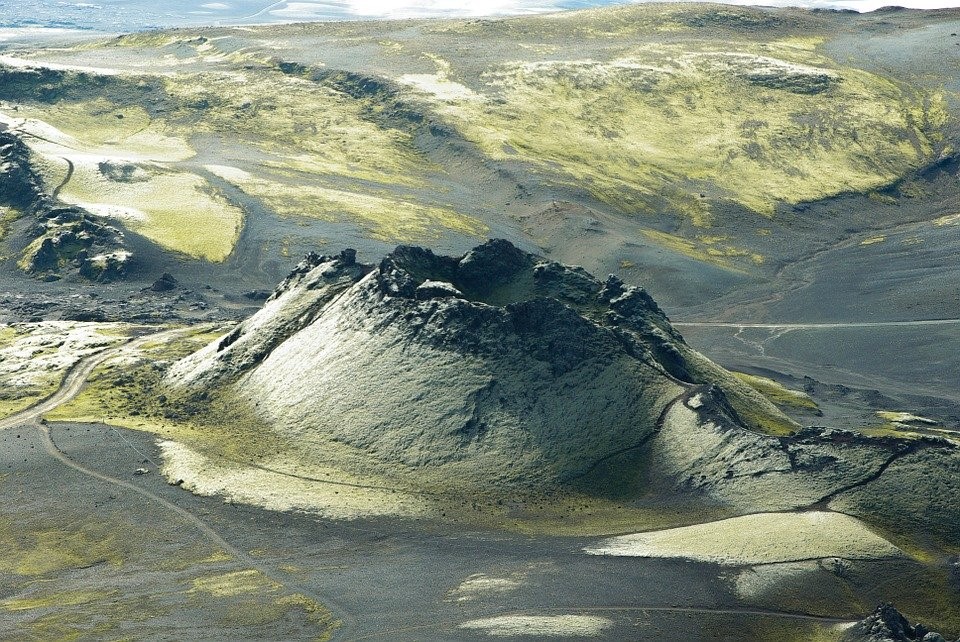 Laki is a volcanic fissure that last erupted in 1783.

This eruption caused a drop in global temperatures due to a massive release of gas. The poisonous ash cloud had a great impact on climate and killed a lot of Iceland's and Europe's lifestock.

The eruption lasted for months, killing 25% of the population of Iceland.

Since that, the volcano is quiet, so you should be all ok when visiting it! The area is actually quite beautiful now and magical to explore.

Located in the Golden Circle area, Hengill has to be in your plan when doing your golden circle tour!

Hengill hasn’t erupted since about 150 CE and isn’t likely to erupt anytime soon. Visit Hengill to explore the various hot springs and fumaroles around the volcano.

This volcano is still active, and its energy is used by two power stations that produce electrecity and hot water.

Boiling water is running so close to the surface that some chefs just burry their food in the ground to cook.

This volcano is one of the most active ones with 20 eruptions since 874! 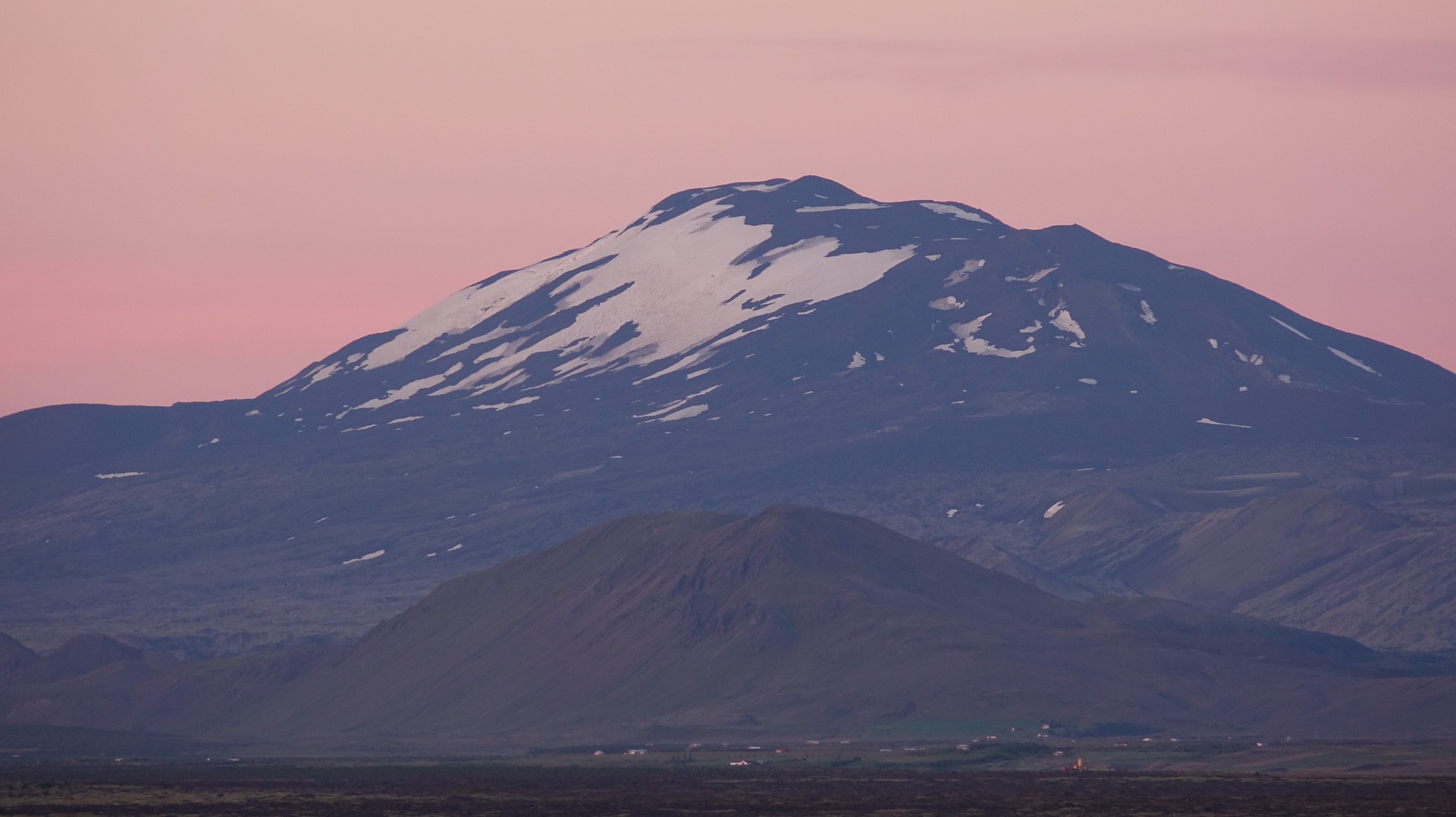 This one is part of the still active volcanoes in Iceland.

Hekla has erupted six times in the past 70 years, and it looks like it could erupt again very soon. Out of all the volcanoes in the world, Hekla has produced the most lava in the past thousand years.

Krysuvik is not really a volcano but a volcanic system. 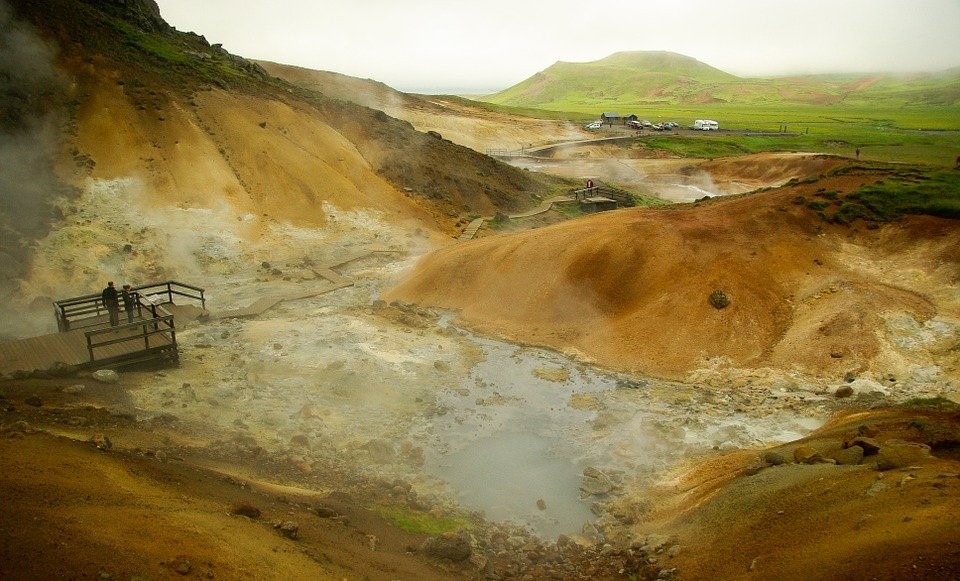 You can run and jump on this beautifully bright yellow, red and green volcano. Krysuvik hasn’t erupted since 1340 CE.

Many tourists enjoy hiking the unusual hills formed by Krysuvik. Safety measures such as wooden bridges and enforced paths are maintained for travelers.

You will find there lots of hot springs, mud pots and steaming vents.

Between May a November 2009, Krysuvik area "grew up" by 3 centimeters.

This one is probably the most famous volcano in Iceland! 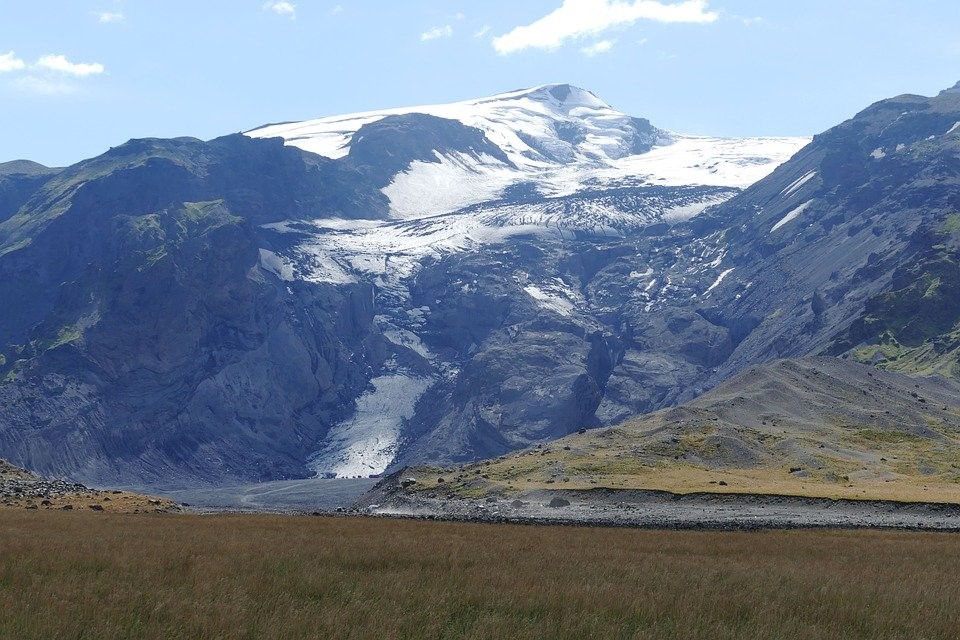 It is actually not a single volcano but a volcanic massif, but is commonly called the Eyjafjallajokull volcano

Eruptions of Eyjafjallajökull happened frequently over the last 100,000 years, and more recently in 2010. The big ash cloud throwed in the atmosphere that caused a lot of trouble in the air traffic. Remember?

Eyjafjallajökull is currently being monitored for signs of future eruptions.

Katla is considered as being Iceland’s most dangerous volcano. Its eruptions can cause huge amounts of damage and land movings.

Katla is expected to erupt soon. It hasn’t erupted in the last 100 years while it is supposed to erupt every 13 to 95 years.

You know what to do, avoid this one :)

Located in the Westman Islands, this volcano is safe and really young. It formed in its first eruption during 1973 and sits at the southernmost end of Iceland. After Eldfell’s eruption, residents used the  tephra surrounding Eldfell as a foundation to build 200 houses on. 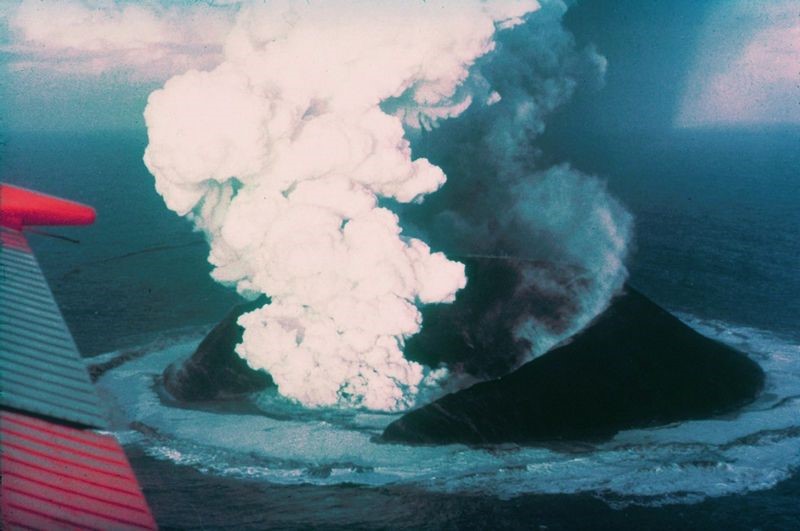 Surtsey is a volcanic island just off the southern coast of Iceland. It is a safe place do to go.

The volcano will only stay above sea level for another 100 years. If you have the chance to get out and explore it, go ahead my friend!

This volcano, located at the very end of Snaefellsnes peninsula, is covered with ice.

This volcano last erupted in 200 CE and isn’t likely to erupt in the near future. You can go there without fear being afraid of anything!

You must visit visit volcano when visiting Snaefellsnes peninsula. Many things activities can be done there: hiking, visiting caves, Kirkjufell mountain, whale watching from the coast... and so on! 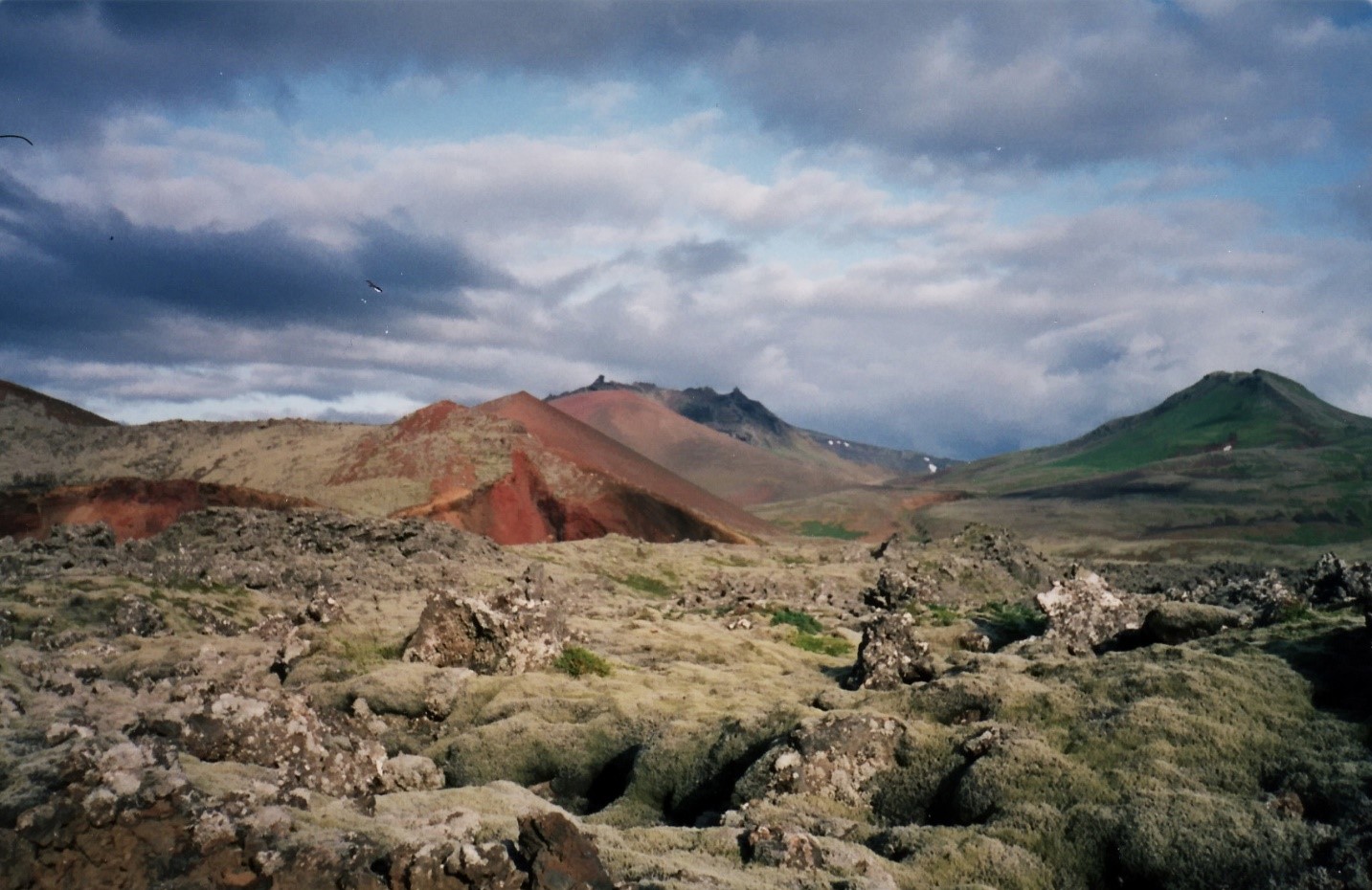 You’re safe with this other-worldly volcano, which last erupted around 960 CE. Ljósufjöll is strangely beautiful, a mix of blacks and gray colors from the silica in the rock.

This volcano is very special, as you can visit a huge magma chamber inside the Volcano! 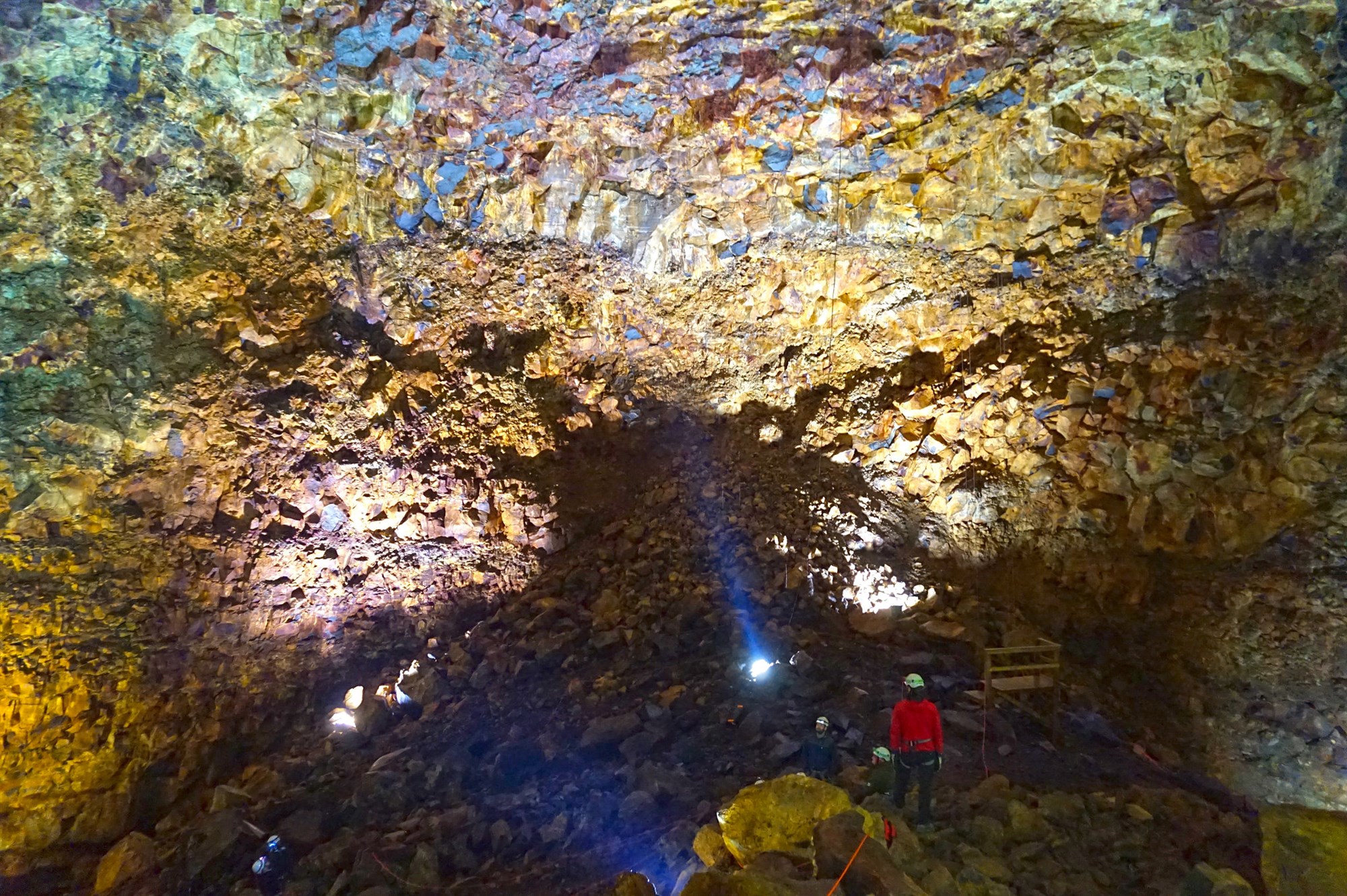 Photo: Thrihnukagigur Volcano - Darren Mercer - Flickr - No changes were made

Located close to Reykjavik, this volcano is one-of-a-kind. If you go there you will be able to visit a gigantic magma chamber, thrills guaranteed! 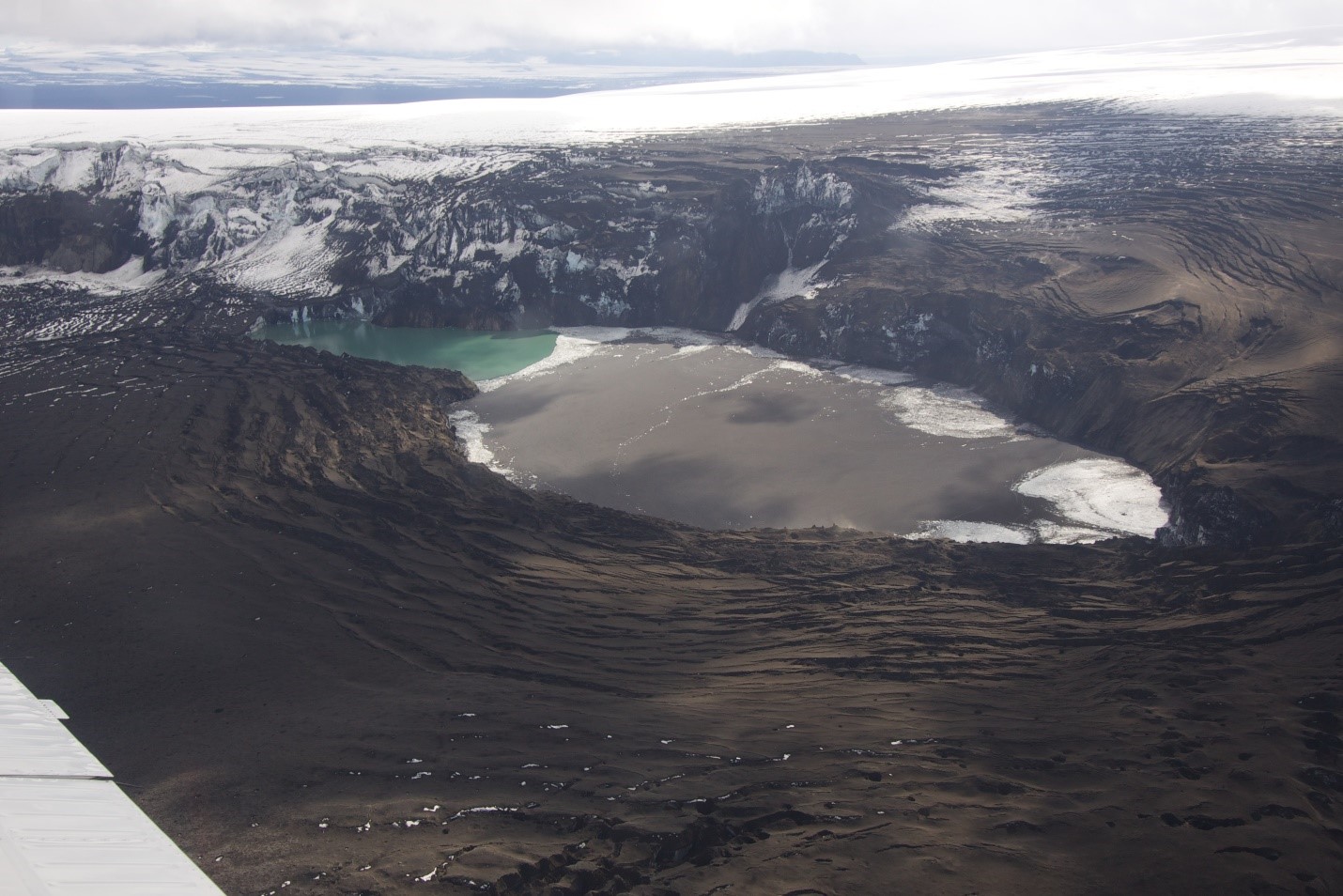 Self-distancing with this volcano. This volcano has the highest eruption frequency in Iceland and last erupted in 2011.

Grímsvötn is thought by researchers to be entering in an active period? And the volcano may begin to erupt every 2-7 years. 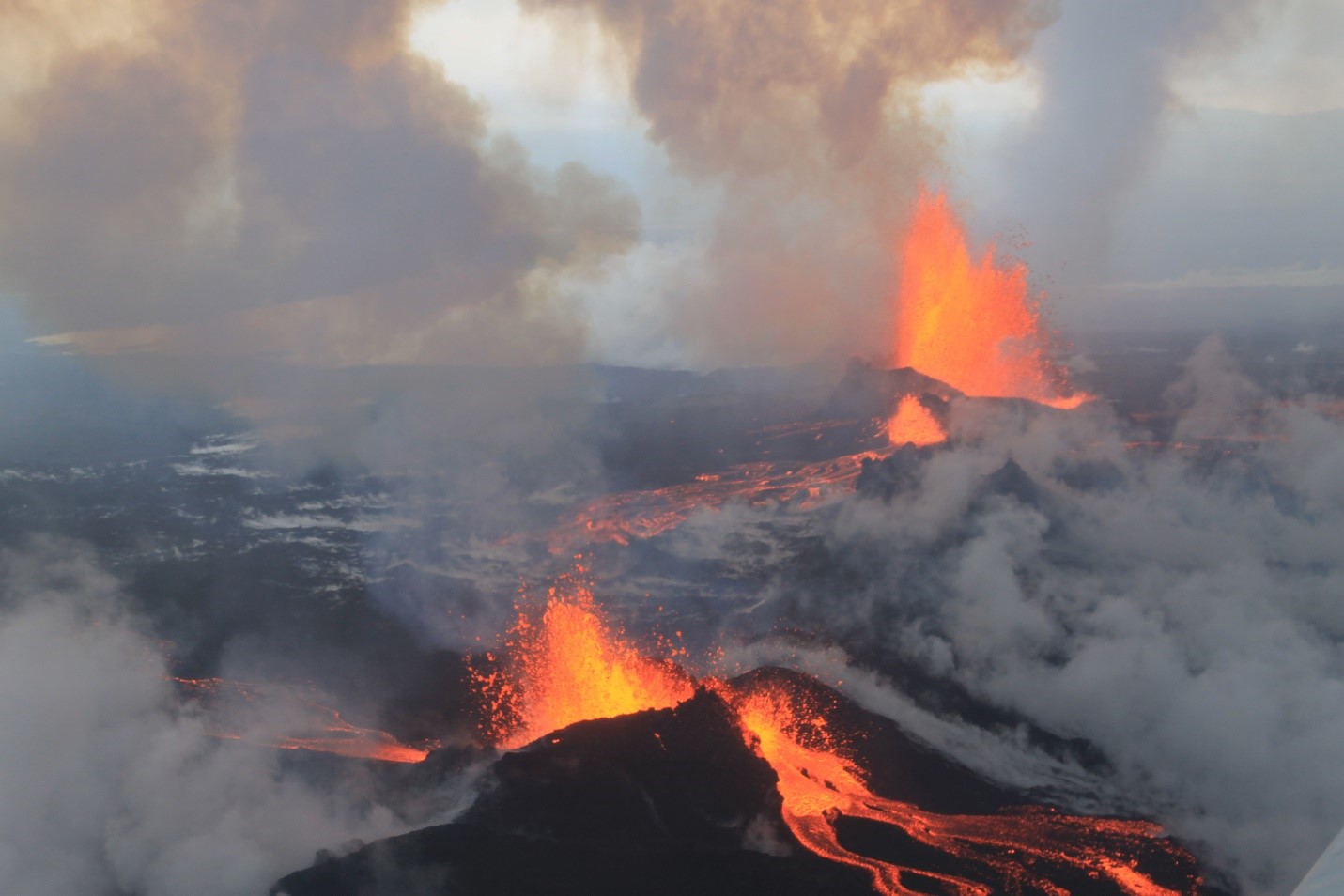 The land around Bárðarbunga has been open up to tourists. Even if activity levels are still relatively high compared to the levels of the past 50 years. 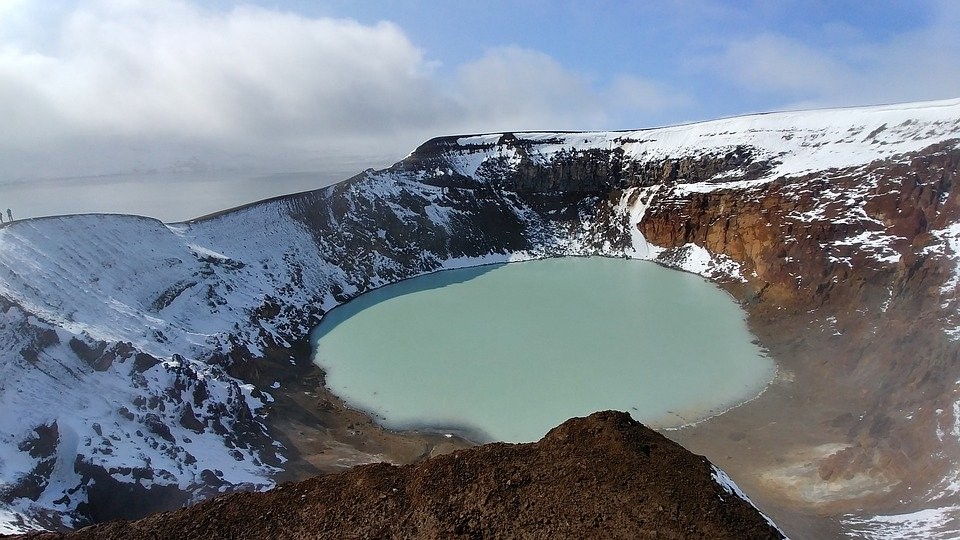 This beautiful volcano hasn’t erupted since 1961. But rising temperatures in Öskjuvatn lake suggest a volcanic activity increase in this area.

Volcanic activity have increased in this area and an eruption is expected. 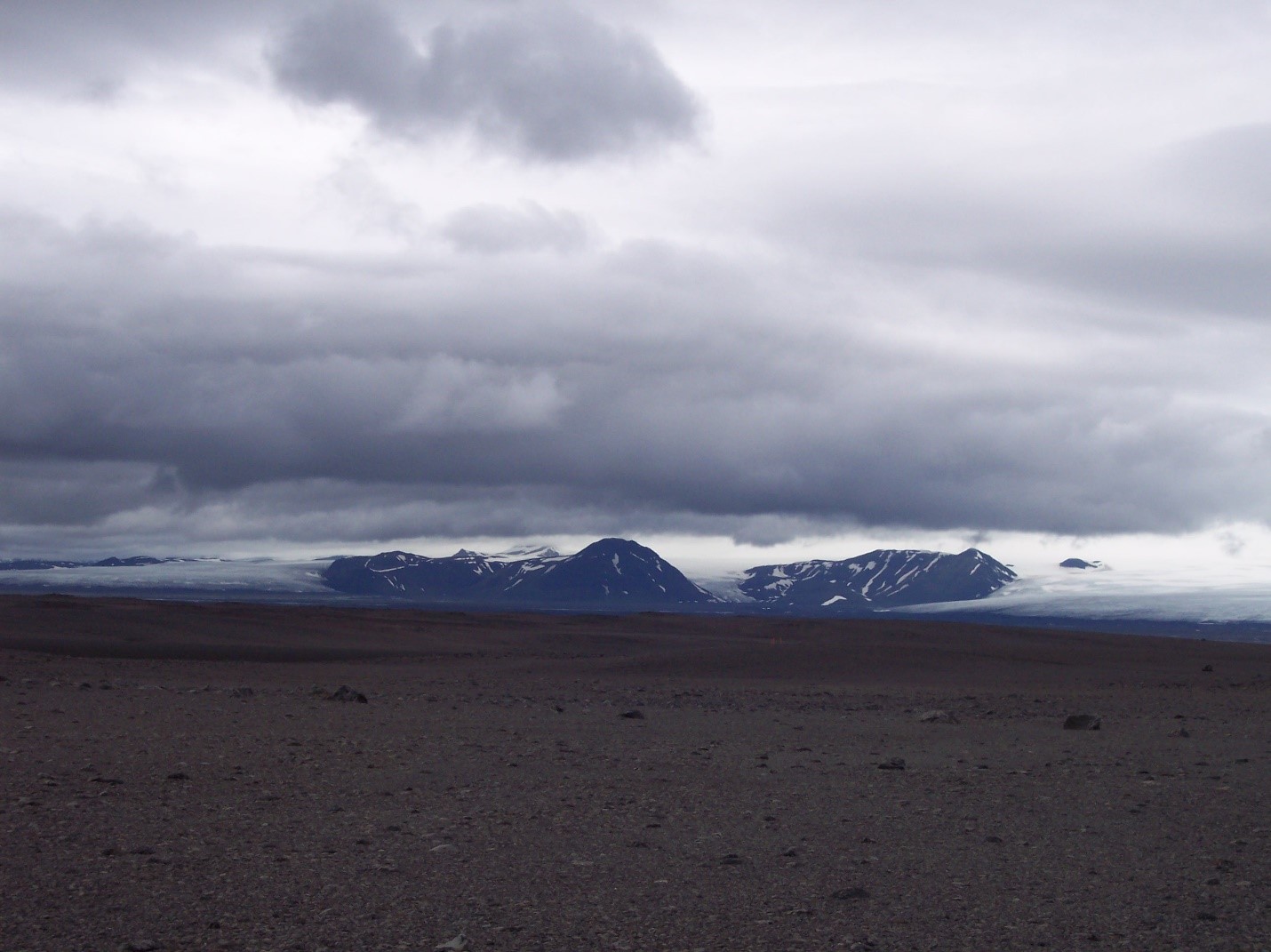 This volcano seems safe by the accounts of residents and scientists. If you’re interested in glaciers, Hofsjökull is a great volcano for you to explore.  It is the third largest glacier in Iceland (as a subglacial volcano). 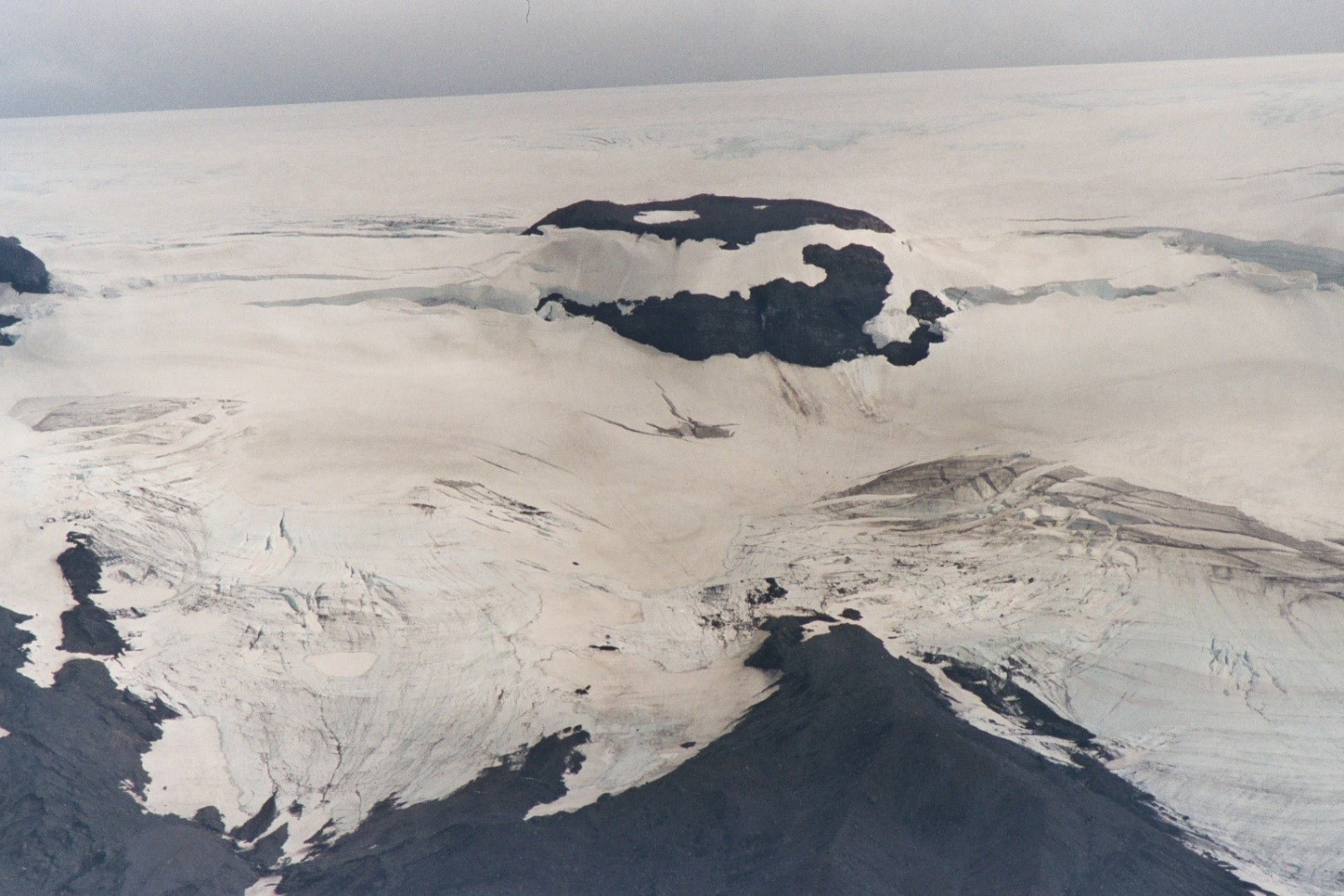 Langjökull is a beautiful volcano that erupted 32 times in the past 10,000 years. The blue, white and green of  Langjökull make this place perfect to explore and hike. As you may understood, this one is safe!

Be sure to visit ice caves when at Langjökull. You will come back with amazing pictures and memories.

What was the worst eruption of Iceland?

The worst eruption through Iceland’s history is called Skaftáreldar (fires of Skaftá) in 1783–84. It occurred in the crater row Lakagigar (craters of Laki) in the southwest of Vatnajökull glacier.

The Laki volcano erupted for 8 months pouring out huge amounts of lava and clouds of poisonous gases.

It killed over 50% of Iceland's livestock population, leading to a famine which killed approximately 25% of the island's population.

How Does Iceland use its Volcanoes?

Iceland is one of the few countries that almost entirely uses renewable energy.

Indeed, they are using the volcanoes’ geothermal energy which constitute a big part of Iceland’s economy and infrastructure.It produces about 30% of its electricity at geothermal power-stations.

Most of the hot water in the country is pumped from the earth to people’s faucets and radiators.

Iceland's tourism industry also relies on volcanoes because they attract a lot of tourists. People really like to feel the power of the island by discovering these volcanoes.

The Westfjords is the only part of the country which has no longer any volcanic activity. Water must be heated by electricity there, rather than using naturally heated water.

What can I do near the safe volcanoes?

Activities like hiking, taking pictures and swimming are usually allowed around safe areas. The best way to visit these paces is, of course, traveling in style using one of our Kuku Camper Vans.

You can choose from one of our small campers designed for 2 people. Or, you can go with a larger one made for 4-6 people.Each van is equipped with a bed, a stove for cooking, and lots of cooking and eating tools.

Contact us today for more information on our hotel on wheels or places to travel in  Iceland!