Guide to the Westfjords 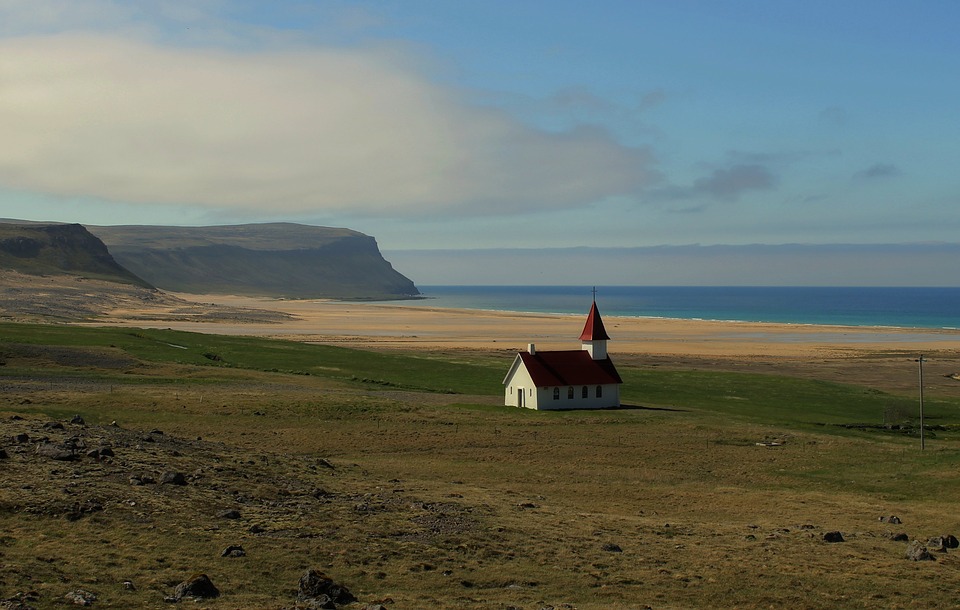 Starving for new adventures with your campervan ? The Westfjords are waiting for you !

Iceland is well-known for its stunning landscapes and breathtaking views, but even despite the rise of its ecotourism industry, there are still some hidden gems on the tiny island.​

One such area that remains underappreciated is the Westfjords, which has some of the most amazing scenery in all of Iceland. Here’s a guide to understanding why the  Westfjords could be your next big Icelandic adventure waiting to happen. 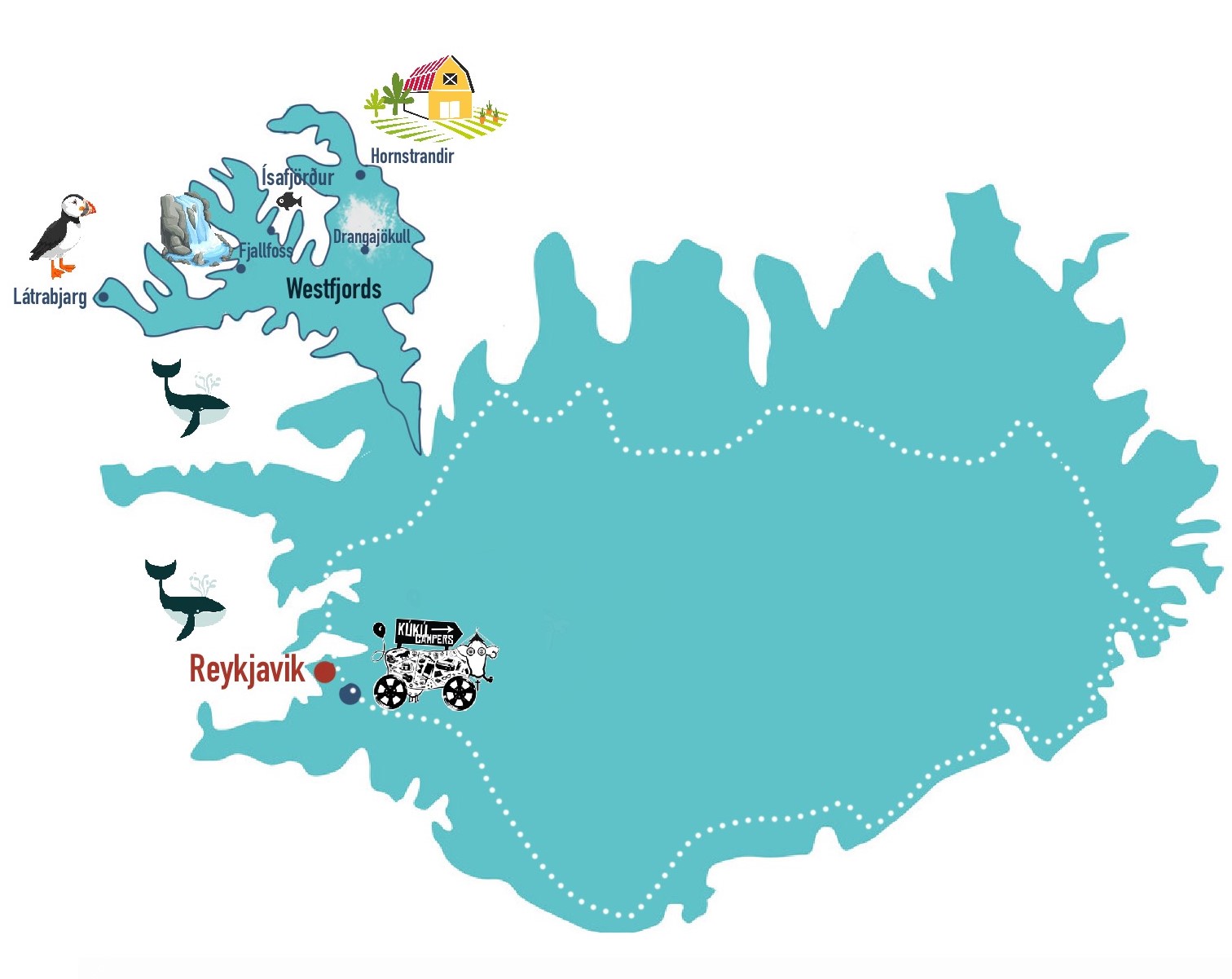 The Westfjord peninsula sticks out off the northwest coast of Iceland,  facing the Greenland coast across the Strait of Denmark.   It’s almost its own island, just barely connected to the Icelandic mainland by an isthmus that is only 7 kilometers (4 miles) wide.   The Westfjords are geographically isolated and difficult to get to, as the land is hilly and the roads are often snowed in.

The difficulty with road travel has been somewhat remedied by the longest tunnel in all of Iceland, extending 9,113 meters (29,898 feet) and providing a  road that does not get blocked by snow. As the name implies, the peninsula is dominated by fjords, which are steep cliffs separated by inlets formed by glaciers.
Some of the rock formations in the area have been dated to be 14 million years old. The region is sparsely populated, with only 7,000 people inhabiting the peninsula, and due to their relative isolation from the rest of the country, the Westfjord communities have a distinct and unique culture. The main settlement, with over half the population of the entire region, is Isafjordur, home to about 4,000 people.

A Quick Word of Warning:

The Westfjords are beautiful because they are so absent of most human civilization; with that in mind, you need to be prepared before you go out hiking through the more isolated areas of the region. While there are plenty of places to camp, hike, and enjoy nature, you should always take precautions because the nearest help would be very far away from you.
Be sure to bring food wherever you go. Also, pack warm clothes as well as waterproof shoes- it can get cold, and a lot of the region is known for its fog. Cold and wet is never a good combination.  Windbreakers would also be optimal; as in the rest of the country, there can be some violent winds. Maps are of vital importance as well. It is very isolated, and while GPS is convenient (and also encouraged), having physical maps of the surrounding area can keep you from getting lost.

Things to Do in the Westfjords

First and foremost, the main attraction of the Westfjords is nature!  Sparsely populated land with rural settings, you won’t have a lot of buildings getting in the way of your views. The cliffs of Latrabjarg are the westernmost point in Iceland and are home to millions of birds on the cliff sides. It is the largest bird cliff in all of Europe. Heading there will get you the opportunity to see nesting puffins- adorable! Another bird is known to nest there is the Razorbill, which heavily relies on Latrabjarg for survival-  over 40 percent of all Razorbills nest on these cliffs. Seeing the birds making their homes here will remind you of the need for humans to protect the natural environment of these majestic seabirds.

Another unique landscape found in the Westfjords is the abandoned farmsteads. These farmsteads were once occupied, but the land of the Westfjords is not ideal for growing crops, and many of these steads were quickly abandoned.
Over time, they have reintegrated into the surrounding wildlife,  becoming overgrown with lush greenery and diverse wildlife. Hornstrandir  Nature Reserve, on the northernmost peninsula, is home to such farmsteads, and also offers opportunities to see arctic foxes. Other wildlife in the nature reserve is field mice, seabirds on the bird cliffs, and seals along the beaches. There are also over 270 species of ferns and flowering plants in the Hornstrandir Nature Reserve, so there are plenty of photo opportunities if you’re into flowers!

There’s plenty of hiking in the Westfjords, too. South of Hornstrandir is Drangajokull, the fifth-largest glacier in Iceland. With an 8-kilometer trail known as the Kadalon Trail, you can hike through the glacier- but be sure to bring good boots! Another popular trail in the Westfjords is the Fjallfoss trail, a trail that takes you right up to the largest waterfall in the  Westfjords, Fjallfoss. It’s an easy hike, only 1.4 kilometers long, so all skill levels can make it to the top. All in all, if you want gorgeous views untouched by human hands, there really is no better place in Iceland than the Westfjords to get your fix.

The largest town in the Westfjords is Isafjordur, a quaint town that is surprisingly urban. Originally established as a fishing community, the sea remains the main part of the culture of the town today. But the townsfolk have broadened their horizons past fishing, and host a variety of cultural events throughout the year. The old hospital in the town center has been renovated into a cultural center, with several showrooms as well as the town library.
There are also many cool cafes in the town center, and a fair amount of live music as well. The town even hosts an annual music festival called  Aldrei for eg sudur, created by local musician Mugison and hosted every  Easter weekend since 2004. There isn’t an entry fee, so it’s a great time for everyone! Another fun town gathering is the annual mud-soccer championship tournament, in which teams of six duke it out while playing soccer waist-deep in mud.
A strange sport, to be sure, but it is quite the spectacle! Other town attractions include a golf course, horse riding, and the Westfjord Heritage Museum, providing information about the surrounding area.