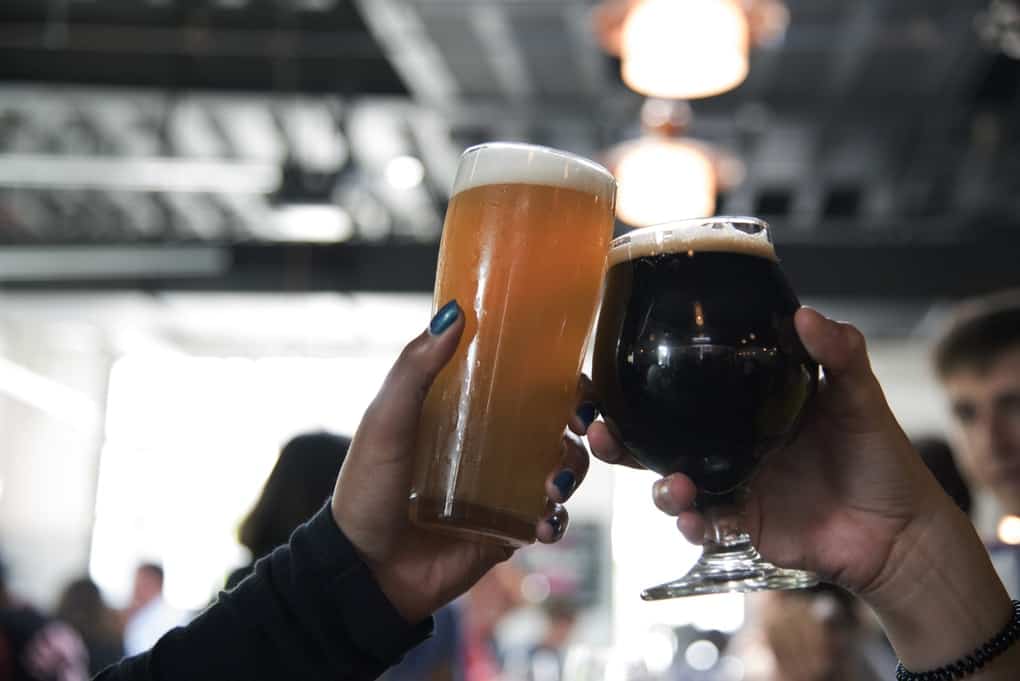 Ahh, beer. The cause of- and solution to- all of life’s problems.  While Homer Simpson may not be the man to take advice from,  we tend to agree that beer is one of life’s great pleasures.

And nobody knows beer like the good people of Iceland, who have a bit of  an odd relationship with the frothy beverage. An anomaly dating back to  the prohibition of all alcohol in 1915 led to beer- but not any other  alcoholic beverage- being banned for 74 years, with the beer ban finally  being lifted in 1989. Icelanders didn’t really seem to miss beer, as they were  typically more invested in harder liquor such as spirits, but nonetheless,  the people celebrated when the ban was finally lifted.

With a drinking age of 20, tons of people show up to drinking events  throughout the year. So here’s a handy list of some of the drinking  festivals that take place in Iceland, along with some of the more popular  bars to visit with your friends.

This is THE beer festival of Iceland. Hosted in February and going  into its 9th year of festivities, the Icelandic Beer Festival is a four-day event  in Reykjavik, the nation’s capital. Select local breweries are highlighted and  enjoyed by many, with some international breweries making their way in as  well. Getting a festival pass will get you exclusive access to the brewers  themselves, who will provide you with samples and teach you about the  beer-making process. The party culminates with a final event in the heart  of Reykjavik which includes live music and exclusive beer alongside  delicious pub food. It sounds like a great time for everyone!

Taking place just a week after the Beer Festival, Iceland collectively  celebrates the end of beer prohibition on the day of the referendum,  March 1st, every year. The event marked a great cultural shift in Iceland;  beer is now the alcoholic beverage of choice in a nation where the drink  was banned just 30 years ago. Reykjavik gets particularly wild for Beer Day,  with pub crawls (known as Runtur in Iceland) being commonplace and bars  staying open until 4 in the morning. While there aren’t any big events of  festivals surrounding the day, Beer Day usually means special prices on  beer at most of the pubs, so chug away!

Things of Note about Icelandic Bars

The bars in Iceland are more or less the same as anywhere else in  the world in terms of etiquette and rules, but there are still some things  you should know before heading out to the bars with your friends. For one,  the legal drinking age in Iceland is 20, but many bars have their own  imposed ages for entry, usually either 21 or 22. Keep this in mind if you’re  on the fringe in terms of age, as you might need to plan ahead a bit.   Beyond this, most of the bars do not enforce any sort of dress code.  If you spent the day hiking up glaciers, you can waltz right into a bar in  your boots and winter jacket if you really want to! Bars usually close at 1  a.m. from Sunday-Thursday, but close at 4:30 a.m. on Fridays and  Saturdays. Again, this can vary, but these are the general times of  operation for the bars in Iceland.

Kex Hostel ​is one of the most popular bars in Reykjavik- and is also  the host of the aforementioned Beer Festival! Situated in an abandoned  biscuit factory, the building is an eatery and hostel as well as a bar. Live gigs are always playing nights at the bar, with several up-and-coming  Icelandic artists making their way through Kex.

Kaffibarrin ​is a coffee shop by day, local night hotspot by night. With  a vibrant dancefloor and a rotating set of DJs, this is a great place to go  out and party in a high-energy setting. They serve a variety of drinks, such  as Opal and Topas, which are liquorice liqueurs, as well as Icelandic  vodka, known as Reyka.

The first cocktail bar in all of Iceland is ​Slippbarinn​, located right on  the Reykjavik marina. With a great view of the waterfront and a rotating list  of tasty cocktails, Slippbarinn is popular for locals and tourists alike.  Using house-made syrups and fresh-squeezed juices, this cocktail bar is  an oddity compared to the more traditional bars surrounding it, but it  represents the burgeoning cocktail scene in Reykjavik.

If you’re looking for a place that’s heavy on the ambiance, the retro  French lounge ​Le Chateau des Dix Gouttes ​is the spot for you. A retro  French cafe during the day, management completely renovates the room  to make it appropriate for the lounge bar setting by night. They serve  Iceland’s only wine brand, Kvoldsol, and are one of the few wine-dedicated  bars in Reykjavik. They also serve charcuterie, cheese, and even waffles to  go with your wine!

If you’re a true microbrewery nerd, ​Micro Bar​ is a great place to  check out local brews. Hosting locally crafted beer from all over Iceland as  well as international crafts, Micro Bar is colorfully adorned with murals by  local cartoonist Hugleikur Dagsson. It’s a great place to test your palette  with various brews, and it’s located in the Center Hotel in Reykjavik.

Harlem​ is a great watering hole if you’re into the artsier side of  Reykjavik. Hosting art freaks and hipsters alike, the interior of Harlem was  painted and designed by sixteen of Reykjavik’s best street artists, giving  the interior a colorful and energetic vibe. DJs get the dance floor grooving
every night, and it really completes the scene between the art and the  music. A great spot for the feel and environment alone.

For a more low-key drinking experience, ​Olstofa Kormaks og  Skjaldar ​is a much more relaxed setting than previous bars mentioned.  With no dancefloor and a soundtrack you can talk over, this is a great  spot for late-night conversation. On top of that, they serve their house  brand Brio, which beat out 4,000 other beer brands to win the World Beer  Cup competition in 2012.