The Diamond Beach in Iceland 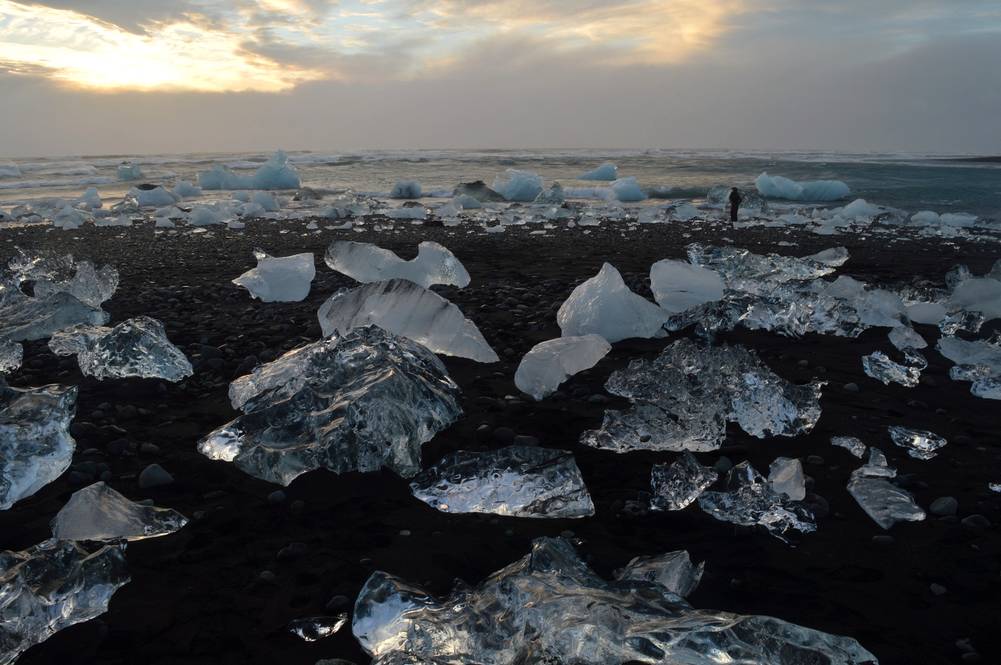 The Diamond Beach in South Iceland

Of all the attractions in southern Iceland, the Diamond Beach is probably the most spectacular. This is the exact kind of place you’re looking for when visiting Iceland. A truly amazing natural site, combined with something you’ve never seen before.

Today, we’re going to discover one Iceland's gem that you must include in your trip plans for your next adventure in Iceland! 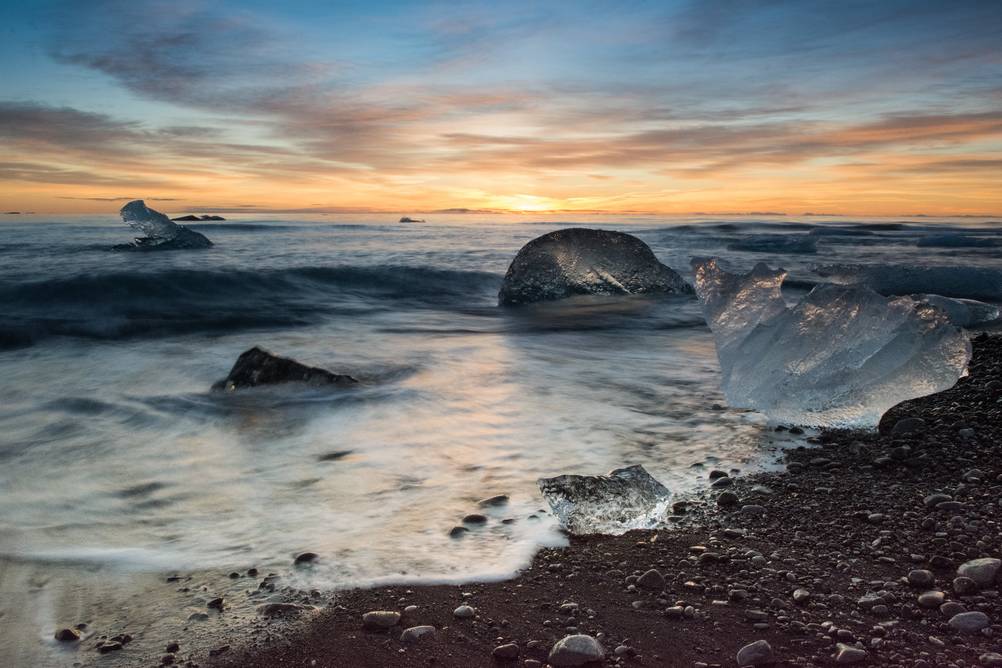 Photo: apasciuto - Diamond Beach Sunrise - Flickr - No changes were made

Why is the Diamond Beach so unique?

This place is one that will make you believe you are on another planet. Without you even having to do drugs!

First, it is a black sand beach. It means that the sand is made from lava, and more precisely basalt. This kind of beach is formed when lava is rapidly cooled by the water, and then shattered by the tides and the strong winds of Iceland.

Other black sand beaches can be found around Iceland, the most known being Reynisfjara and its basalt columns. 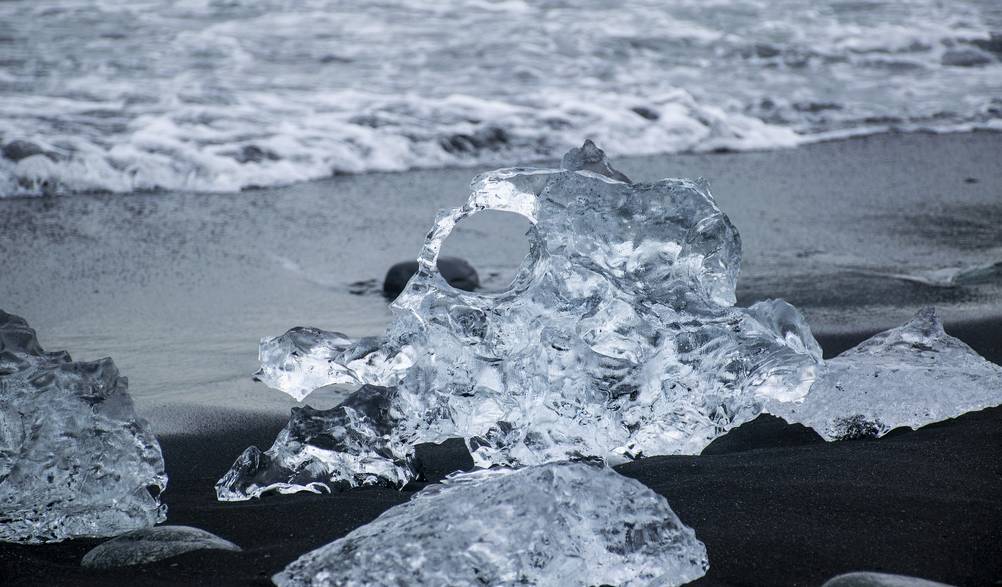 Photo: Ice chunks on the iceberg beach in Iceland

But what makes the beach so unique are the ice chunks that are kindly placed here. They contrast well with the black color of the sand.

But that’s not all, the beach is even more impressive when the sunlight pass through the ice. Creating a breathtaking scenery, with the waves sometimes crashing on the bigger pieces. 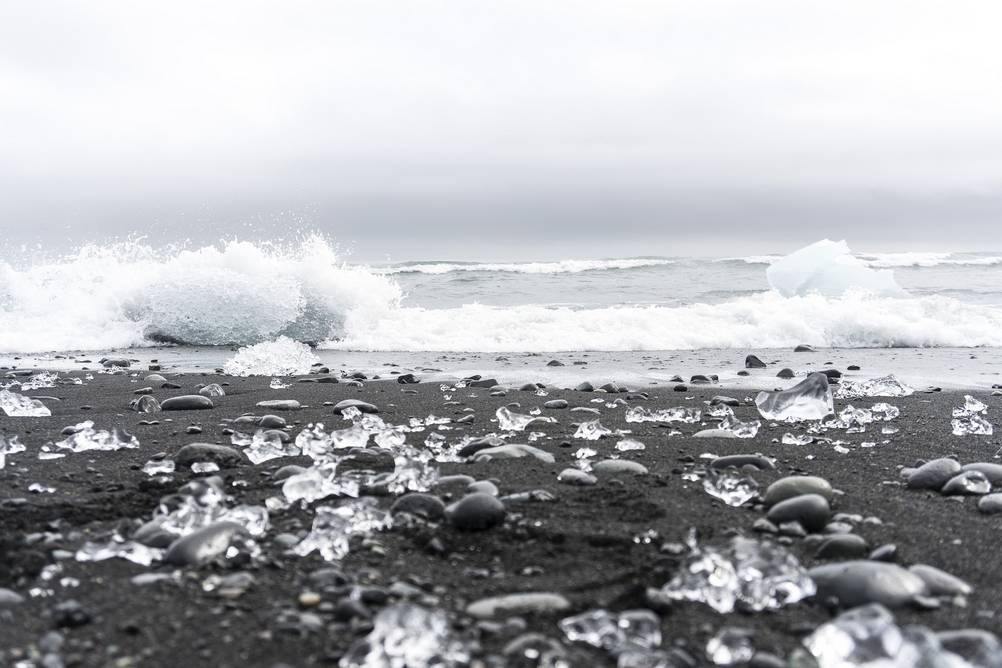 Photo: See the waves crashing on these big icebergs

The ice is what gave the name to this beach, the “Diamond Beach”, but it is obviously not its real name. The real name is Fjellsfjara, which belongs to a long glacial outwash plain called Breiðamerkursandur.

The name was made up to attract travellers, it is more catchy and understandable for foreigners, don’t you think so?

Why are there blocks of ice on the beach?

This particularity of the beach is due to a completely natural phenomenon, probably unique in the world. Yes, nature does things well! 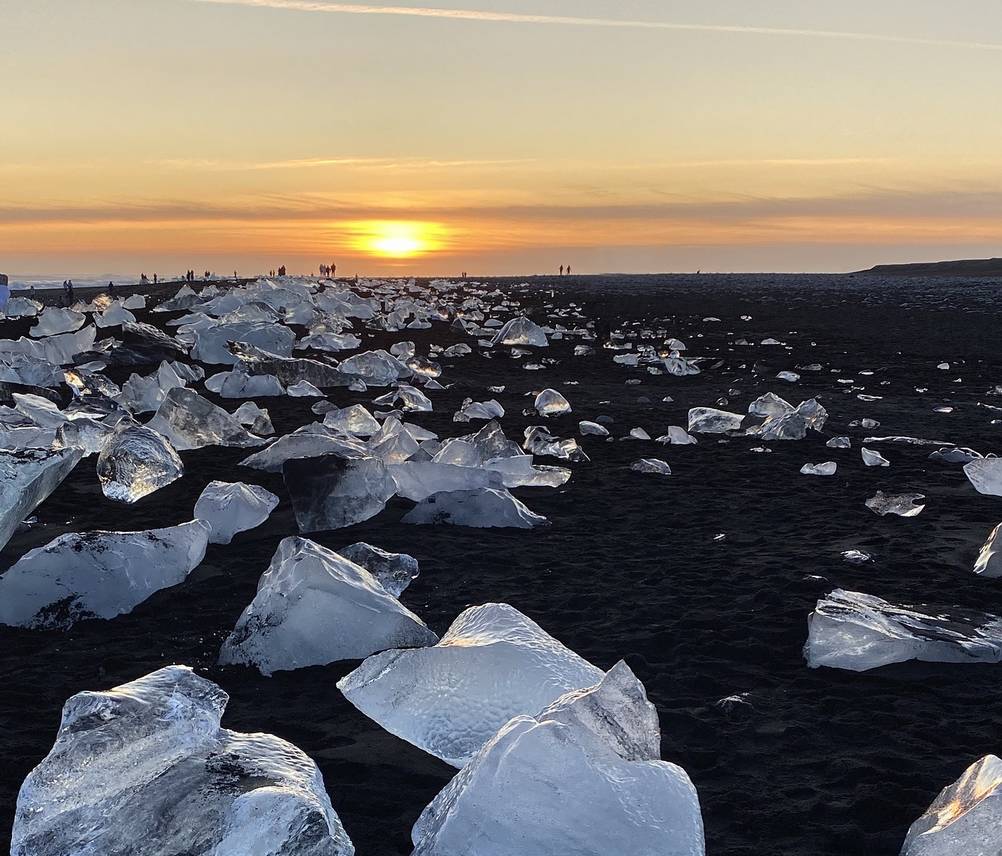 Photo: The beach is incredible during the sunset!

It’s impossible to explain without talking about the Jokulsarlon glacier lagoon. You probably know this place, as it is one of the most famous and visited places in Iceland.

Jökulsárlón is a lagoon filled with icebergs floating on the surface. This ice comes from the nearby Breiðamerkurjökull glacier. The lagoon was unfortunately formed by the excessive melt of the glacier, which is caused by the climatic changes. 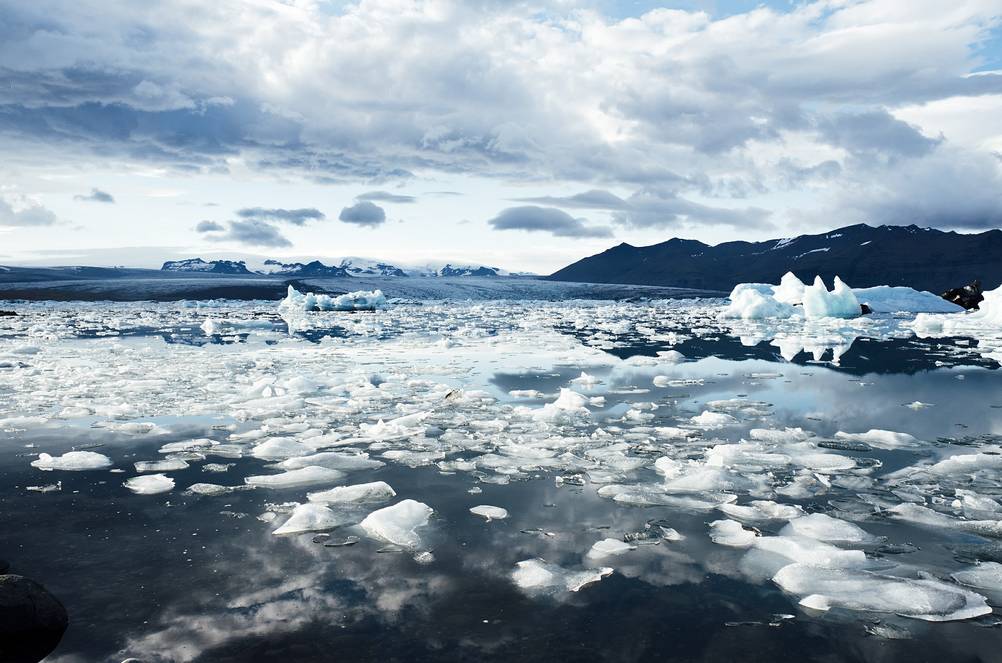 The lake is 18km² and is now four times the size it was in the seventies. The water is up to 248 meters (814 ft.) deep, making it the deepest lake in Iceland.

But this natural disaster also emerges positive things. Jökulsárlón is now the home of numerous seals. They can be seen all year round, but especially in winter. It is at this season that they get closer to the sea to catch a maximum of fish!

So if you want to have more chances to see them, try to come in winter.

You can also go for a boat tour on the lake. That would be a good option if you really want to see seals and take a closer look at the glacier. The tours usually last one hour, and prices start at around €64 ($75).

Alright, but what happens to the ice?

You’re right, we were talking about the beach here.

In fact, the glacier lagoon is connected to the Atlantic Ocean via the Jökulsá river. When the water is going out of the lagoon, it takes with it the floating ice. 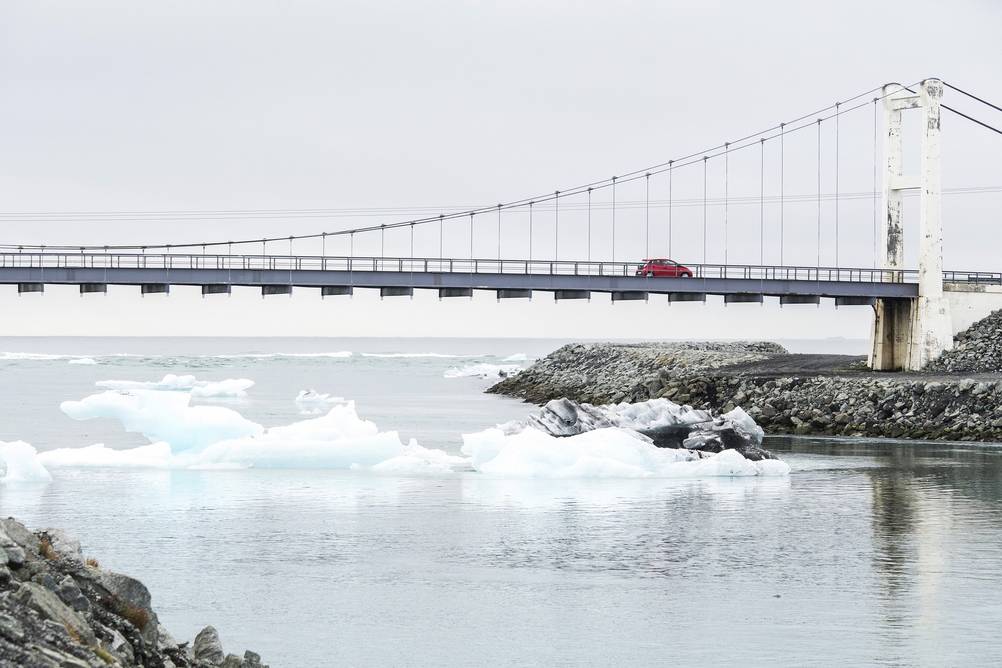 Photo: Icebergs going out of the lagoon

The water is not always going the same way though. During high tide, seawater is coming into the lake, and mixes with its fresh water. This is why the lagoon has its unique color!

Once in the ocean, the ice chunks are polished and eventually wash ashore because of the tide, creating this unique place.

This is as simple as that. 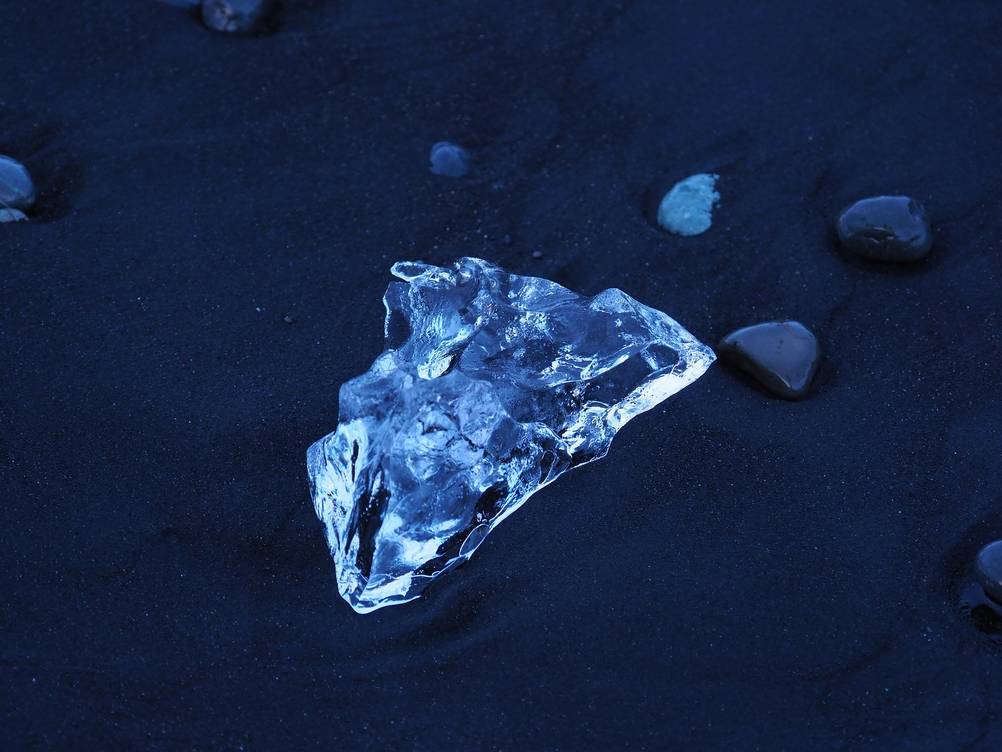 The ice-chunks can be the size of a coin to the size of an adult, and even bigger sometimes! They can be white, transparent or even blue. And their shapes are just amazing, they look like they were sculpted by the hand of men!

What’s so good with the Diamond Beach is that it is always changing. Melted ice-chunks are always replaced by new ones! So, you can come multiple times if you want, you will always be amazed, or should I say almost always…

Is there always ice-chunks on the beach?

Well guys, I am sorry to tell you this terrible truth. It may happen that you will not see "diamonds" when you come to the Diamond Beach… 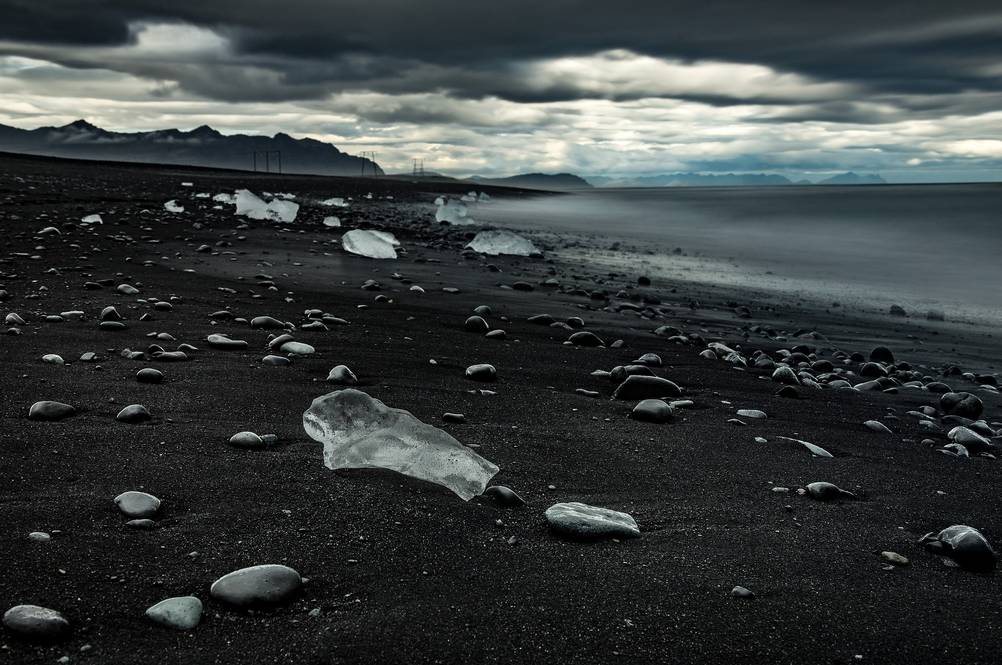 Photo: Sometimes there are no/less ice-chunks on the beach

But if you already read some of our articles, you know that Iceland is not predictable. It's the same as seeing nothing during a whale watching tour, or having bad weather during your trip… This is how it is in Iceland.

No worries though, this is quite rare that there’s no diamonds on the beach, and you should have plenty of them during your visit.

When is the best time to visit the beach?

It doesn’t really matter when you come to the glacier beach. You may think that in summer it is too hot for there to be ice on the beach… But that’s not the case!

Winter or summer, it doesn’t really matter. However, it is true that the ice melts a bit faster in summer, but the difference with winter is too small to take it in account. 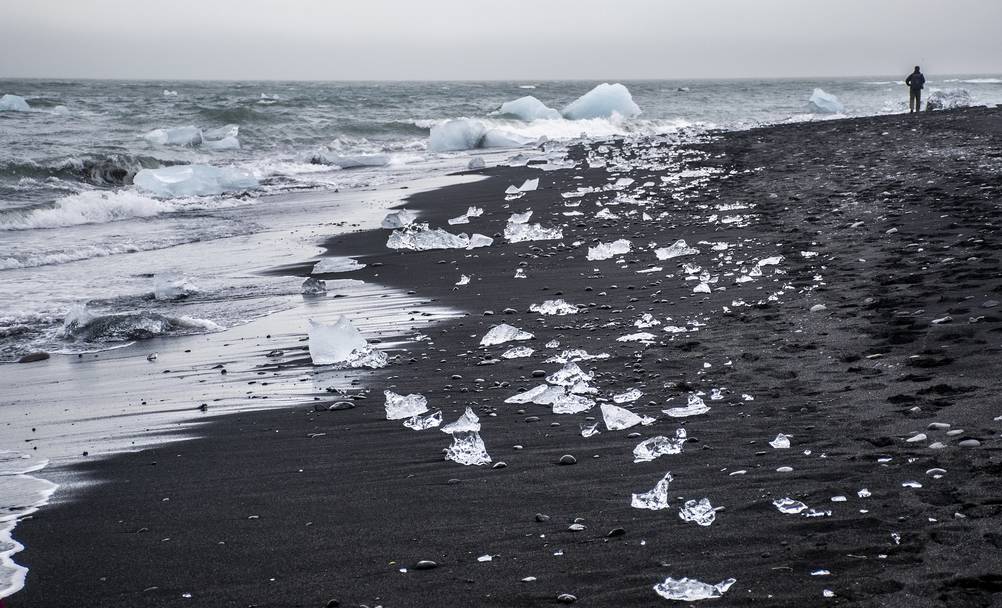 What matters is mainly the length of daylight. In summer, days are never ending in Iceland, allowing you to do more things in one day. But the temperatures are also a bit higher, and you’ll be more comfy and warm under a sparkling sun.

The other thing is the road conditions. The Roads of Iceland can be pretty challenging, strong wind and snow will require you to be extra vigilant. While in summer, driving in Iceland is easy like daddy in mommy!

Safety at the Diamond Beach

While the beach is pretty safe, there is one simple rule that you must follow:

It can be tempting, we know that. Climbing on the ice to take the best picture you can ever have is understandable, but very dangerous.

First, you can slip easily and hurt yourself on the sharp edges of the ice. Also, ice blocks can turn over and get you stuck under. Especially if it is partially in the water. 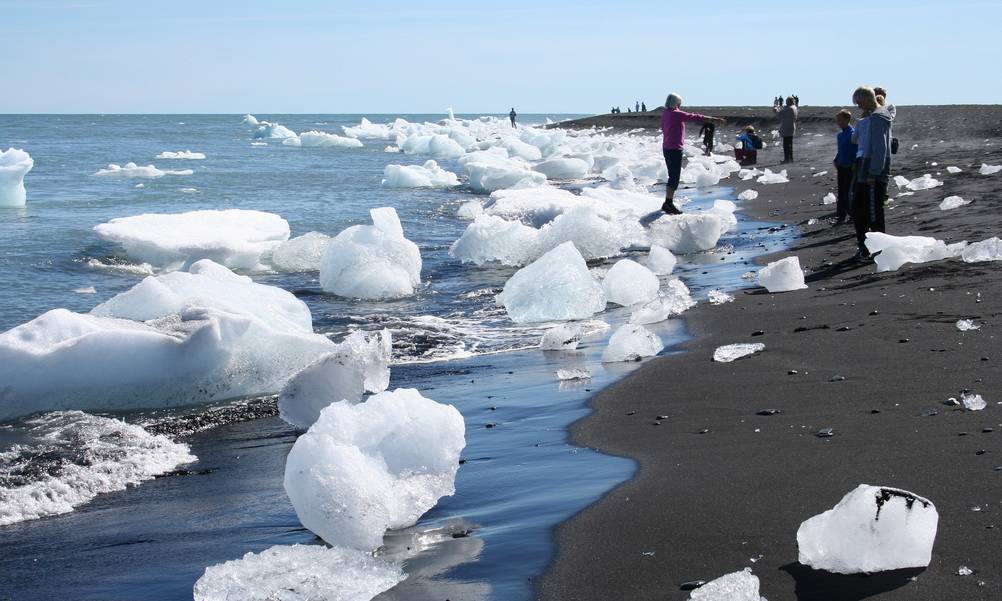 Photo: This is exactly what not to do at this beach

You can read this story of a tourist trapped on an iceberg at the Diamond Beach.

In general, just remember that Iceland is not an amusement park, it is a wild country, with everything that comes with. :)

But if you follow this simple rule, you’ll have the best time of your life at the Diamond Ice Beach in Iceland. And you will come back with memories for life!

Put on waterproof and windproof clothes to go to the beach. Also remember, the key to be nice and comfy in Iceland: layers, layers, and layers!

How to go to the black diamond beach in Iceland?

The beach is located on the south coast of Iceland, next to the Jökulsárlón glacial lake. It is a part of the Vatnajökull national park (where you can visit ice caves!!).

It is about a 5  hour drive from Reykjavik, and easily accessible from Route 1 (the Ring Road). If you come from Reykjavik, you will see the glacier lagoon on your left. The beach will be on your right.

Where to park? There are two parking lots, one on the side of the beach, and another one for the glacier lagoon. They are quite big so you shouldn’t have any trouble finding a place, even in high season.