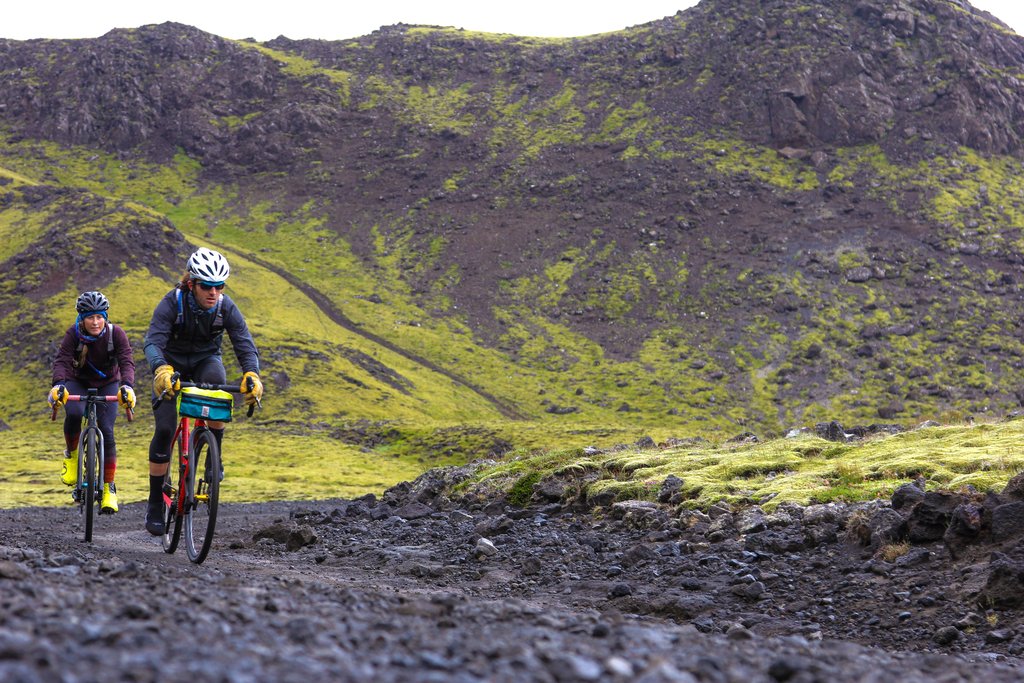 The beautiful island of Iceland is deeply intertwined with the  natural landscape, from massive volcanoes to green meadows  to enormous glaciers. What better way to experience  what Iceland has to offer than via bike?

It’s as close to the natural world as you can get without  hiking straight through it! So here’s a handy guide to bicycling through the  wondrous island of Iceland.

It should be stated upfront: seriously biking through and around Iceland is not  for the faint of heart. You need to be ready for rough terrain and adverse  weather conditions- and that’s not to mention the heavy car traffic along the  main roads that you’ll need to watch out for.
Here’s what you’ll need to consider before you start biking: Warm clothes, spare  parts for your bike, enough food to keep you going between towns, and a fair  amount of money. The weather can change from minute to minute, so you need  to be prepared for the worst. Generally speaking, the best time to bike in Iceland  is in the warmer months from May to early September, when the temperature  usually floats in the 50 degree fahrenheit range. That said, the weather in Iceland  is heavily variable, with high winds of special concern, so be prepared for  anything. Another major concern in recent years has been erosion of local  vegetation and wildlife. Offroading is strictly prohibited, so be sure to stick to the  designated paths.

Respect nature- it isn’t that hard!

The amount of cars populating the major roadways has only gone up, and there  are no bike lanes or paths along the Ring Road, which connects all of Iceland. For  this reason, we suggest that you bike in more remote areas, to increase the  likelihood that you’ll have the road to yourself. That said, biking in remote areas  brings challenges of its own. You need to have spare parts for your bike in case  you break down, as there are often upwards of 50 miles between towns. You don’t  want to get stranded out there!
All of this is to say that this sort of experience isn’t something you can just waltz  into without any planning. Know your route, bring the necessary supplies, and be  aware of your surroundings. If you do these things, you should be absolutely fine.  Now onto the fun stuff!

As mentioned in the “before you go” section, this is for seasoned veterans only! Be  prepared to spend nights in a tent on designated campgrounds, and have  adequate supplies.
Also have a good understanding of your planned route, and keep maps on you.  Remote biking in Iceland is your best bet, as the main roads get clogged quickly,  but what better way to get in touch with nature than being out on the open road,  right there alongside it, with just your bike and your supplies? With proper  preparation, it can be a wildly rewarding experience.

Bicycling through the island is an arduous task, but the capital city is actually  very bicycle-friendly so long as you stay within the city. All sorts of bicycle tours  are offered, giving you a unique perspective on the sights and attractions of the  city to go with some healthy exercise. Their prices and routes vary, but this guide  will focus on one tour which seemed of particular interest. For $82 dollars, you  can meet up with a local guide at the Old Harbour and set off on a three hour tour of the city’s charming architecture, vibrant street art, and natural  landscapes. All skill levels are capable of enjoying this tour, and your guide will  offer all sorts of interesting information about local buildings and their history.  What better way is there to immerse yourself in the history of the capital?

If you’re looking for a bike tour that’s more in touch with nature, you can take a  tour on electric bikes through the lava fields of Burfellsga canyon. For $162  dollars, you can ride your electric bike on a three-hour tour of the natural  landscapes just outside of Reykjavik. You will get an incredible view of the lava  field, tracing the path the lava flowed out of the massive crater known as Burfell  and towards the sea. Once you get to the base of the crater, you will park your  bike and hike up the side of Burfell, giving you an amazing view of the  surrounding canyon and lava field. It is a view like no other.
Another great outdoor bike tour is based in Husavik, a small town on the north  coast of Iceland. For $131 dollars, you can take a mountain bike trip through black  sand beaches and along the Budara river, culminating in a final stop at the  breathtaking cascades known as the Eider Waterfalls. It is a great place for  photos and pictures of the surrounding landscape.
From there, you will return to Husavik along a different path than the way you  came, following the coastline to the man-made ponds of Kaldbakstjarnir. This  area is famous for bird watching, so keep an eye out! The tour is for all skill levels  and not too strenuous, but be sure to bring a snack.
If you’re a more experienced biker looking for more of a challenge, then take a  trip via mountain bike to Blafjoll mountain. Just outside of Reykjavik, you’ll be  carted to your destination by a Jeep, then left to bike all the way back to the city.  Situated in a 5000-year-old lava field, you’ll bike at blistering speed through the  eerily barren landscape. It is an exhilarating and beautiful experience that is well  worth your while if you want a more serious biking experience. It can run a bit pricey- in the $250 dollar range- but if you’re a thrill seeker who loves nature, this  is the ride for you.